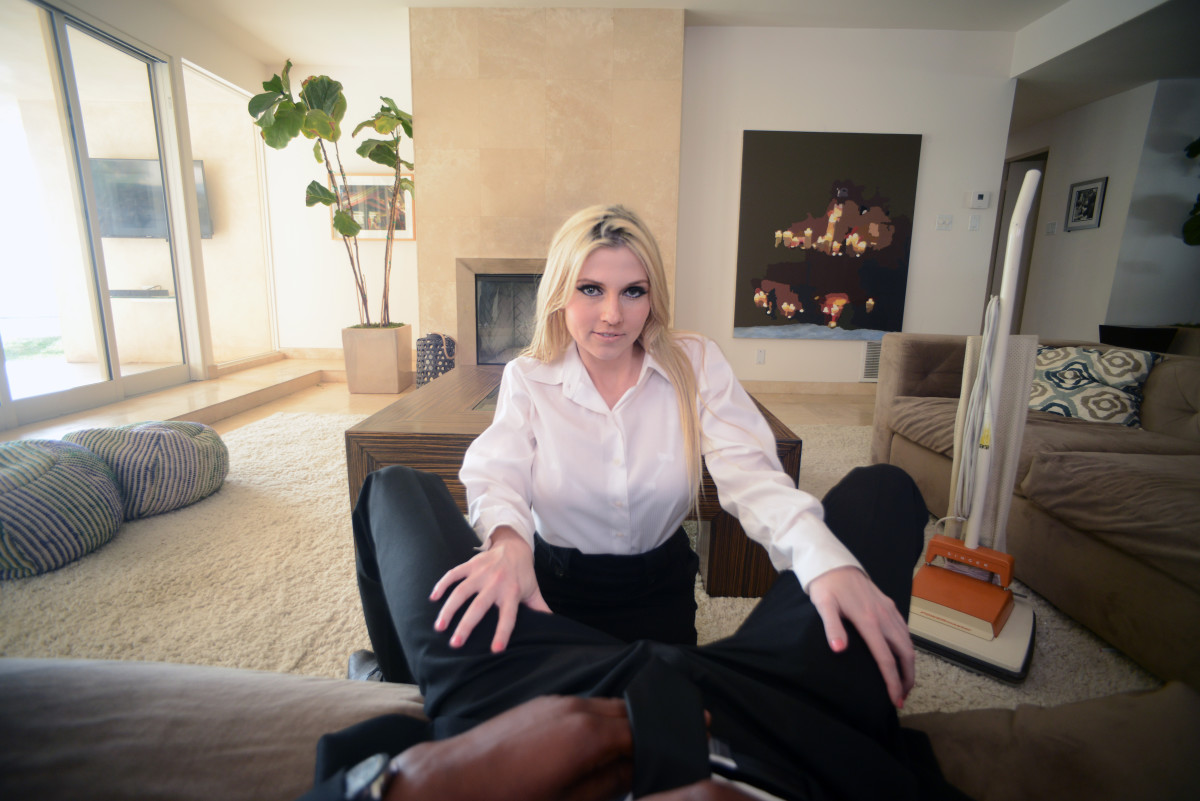 I walk up to a large, white mansion. I knock on the door and a woman in a white shirt and black skirt opens the door. She greets me by saying “hello handsome” as if we’ve met before.

She grabs the vacuum cleaner I’m holding in my hand and smiles before saying, “I’ve been meaning to replace my sucker for some time.” She invites me inside.

The next thing I know I’m sat in an open-plan living area. The fire is on, I can see Hollywood from the terrace to my left. The woman meanwhile is attempting to clean the shaggy carpet using my vacuum cleaner – although it doesn’t appear to be plugged in.

Within second, my host is in between my legs and is unbuttoning her shirt. I look around, I can see the garden off to the right and what looks like the kitchen. I look back. This time the woman is rubbing my groin. I appear to be the best vacuum cleaner salesman of all time.

The rise of VR

We’ve had virtual reality before. There have been many iterations on this concept of creating worlds like our own throughout history. The term ‘virtual tourism’ was first coined when machines that merged two stereoscopic images were installed in public spaces way back in 1939 – it wasn’t until 1991 that consumers had their first taste of alternate realities we now refer to as VR today.

A company called Virtuality produced big, cumbersome machines that could only fit inside arcades and cost a small fortune to play. The problem, despite its size and cost was a lack of titles and content to keep people satisfied, leaving VR to Hollywood and our collective imagination.

But in 2012, a student by the name of Palmer Luckey went to E3 and showed off a very early prototype of his head mounted display called Oculus. James Cormack, the co-founder of id Software was so impressed by what Luckey had achieved he announced that Doom would be compatible with Heads Up Displays (HUD), including Oculus.

From that moment, VR has exploded into our consciousness once more. Companies across the world have been falling over themselves to make hardware. At the bottom end of the market is Google’s cardboard – a $25 make-it-yourself headset designed to work with your smartphone. At the top end is Luckey’s Oculus, a $599 PC-powered device complete with hand held tools to allow you to see your hands in virtual reality.

As a result, Juniper Research forecasts that wearable VR HMD (Head Mounted Display) shipments will hit three million this year and balloon to ten times that amount by 2020. In terms of revenue that will make the headset industry worth $4 billion, less than eight years after Oculus was first seen by the world.

Users fell over themselves trying to find superlatives to explain the experience as the above video attests. “Google Cardboard is like a gateway drug,” says Gilder. “Once people see how good this technology is, they immediately want to upgrade to a better headset.”

Shortly after the video went viral, the company started handing out 10,000 Google Cardboards to the public, for free. They ran out within 24 hours.

Since then, BaDoink has recorded close to 100 scenes in VR so far and is currently producing two a week. Each of those videos can be downloaded into formats compatible with Oculus, Gear VR or Cardboard-style headsets.

“Our business model has always been technology focused,” Gilder tells me from Barcelona, the home of the company’s main development offices.

“Content is secondary to the tech. You can’t be a studio in this sector and not have a really, really super-strong tech team that’s staying on top of every technological innovation. It’s five percent content, 95 percent technology. It’s the only way to stay competitive and to grow. The overwhelming majority of the guys I work with in Barcelona are developers. We have 30 plus developers and the rest are execs like me.”

Those developers spend most of their time pouring over security and stability but also analyzing the user data that floods in whenever someone watches a video. “People who are first to engage with this new platform tend to have a lot of things to say,” says Gilder.

“They’re feeding back a ton of information and I would go so far to say that this whole platform is being crowdsourced.”

Browsing through the online catalogue, it’s easy to see most of the audience thus far appears to be white, straight and male. Most scenes are boy/girl with the viewer taking on the role of the former. However, there are a few where the girl gets to be front and centre.

Most of the content is filmed using a 180-degree field of view, which is achieved by filming with two Sony A7rii cameras with 8mm fisheye lenses bolted together in a custom rig.

‘Why not do 360 degree films?’ I ask Todd. “Most of our scenes are 180-degree field-of-view because, let’s face it most of our watchers are lying down and don’t need to see what’s behind them.”

The company has produced some films where you can turn your head around to see what’s happening using an array of GoPros that create a full field of vision – apart from straight down.

In one video I saw, the viewer is lying down while two couples go to town on each other around you. You can choose which couple to watch by looking in their direction.

But filming in VR presents a number of challenges, both for the performers and directors.

Staying out of the picture

In order for the viewer to feel like they’re actually in the scene themselves, the cameras need to be at eye-level of the actor.

That means for performers like Isiah Maxwell, they spend more time looking at ceilings than they do at the person they’re with. “I have to subtract myself from the equation because I’m not supposed to be present. I have to keep my focus on staying out the picture versus focusing on the girl,” Maxwell tells me.

“One of the biggest challenges is directing the models to work in a manner they’re not used to,” explains Dinorah Hernandez, BaDoink’s VR content manager.

“It’s a completely different way of shooting and it could be a little challenging for everyone involved. On the one hand, the male model’s movement is very restricted. He has a camera blocking his view. He needs to stay as quiet as possible and he has to remain aroused throughout the entire process.”

The women on the other hand, have to do the vast majority of the work.

“She has to take complete control of the scene, make a lot of eye contact with the camera, hit all of her cues and mind the framing along the X, Y and Z axis. If the framing is wrong, visual distortion can occur and she can end up completely cropped out of the picture. We’ve been able to correct these issues with proper casting and plenty of rehearsal.”

I asked Christie Stevens, the star of the video I watched about her experiences of shooting in VR.

“It’s a lot more limited as far as what positions we can do,” she explains.

“I also have to change how I pose and move because the angles look different through a VR lens. It also takes a lot more energy on my end because the male talent can’t move much or talk at all, so all the dirty talk is up to me. Normally there’s a flow between partners but with VR the majority of the performance is put on me, or the female performer. I also have to train myself exactly where to look into, at, or above the camera.”

Because of these restrictions, shoots often take twice as long as regular scenes to perform, which can put a strain on the performers.

“VR is definitely more difficult physically,” explains Stevens. “And the constant eye contact with the camera can be straining. I did a boy/girl/girl VR scene recently though and it was easier with another female performer there to share the work. When one of us got tired we’d just switch out.”

To keep the viewer engaged, there’s an entire production suite tucked away out of view.

In addition to the cameras, there are two 4k external recorders, a proprietary head mounted display monitoring system so the director can see in real-time how everything looks as well as the lights, monitors, still-image capture and promo-content being created all at the same time.

Because BaDoink is now demanding content on a weekly basis, it’s forced companies like Euclid to evolve much faster than they normally would have.

“A good example of how working with BaDoink has improved our methods is our HMD monitoring system,” explains Burton.

“Monitoring is a tricky thing in VR. It’s easy enough to get an image displayed on a flat monitor, but it doesn’t really give you a clear idea of what the image will look like in a headset. We developed the HMD monitoring system so that a producer, director, etc who’s never seen VR before can see what they’re shooting as it will look in final delivery. Before this innovation, we were literally setting up camera and hoping for the best. “

“Normally, in adult, given multiple subscription options, subscribers overwhelmingly opt for monthly membership. But with VR, we are seeing over 50 percent opt for the year-long subscription right out of the gate. In our 12 years of offering adult pay sites to consumers, we’ve never seen anything like it,” Gilder explains.

With BaDoink managing to make a profit out of VR within a year of deciding to abandon regular film means the future of the medium looks bright. That also means, eventually Hollywood is going to have to start thinking about how the giant studios will deal with the challenge of shooting stories when the viewer can easily ignore what the director wants them to see.

The people I showed it to were definitely impressed by it, almost giddy in fact. But when I asked them if they could see themselves becoming regular users, none of them said “yes”. It was more a “maybe” and “possibly”.

Are we going to get used to wearing Heads Up Displays whenever we want to watch something or will it just stay a niche experience? Only time will tell.

All images courtesy of BaDoink.

Read next: 5 impacts of speech recognition system in various fields