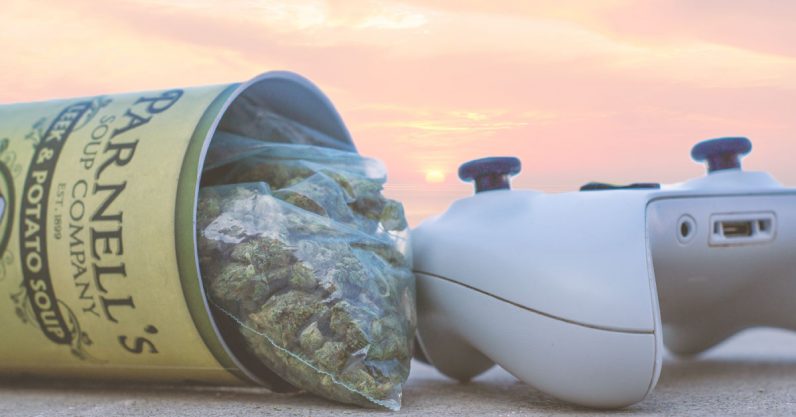 Highly Recommended is our new series talking about the experience of safely engaging with tech-based entertainment and gadgets while “high.” We hope our frank, open approach to this subject matter will aid in the fight to normalize the legal use of cannabis for recreational and medicinal purposes.

Rockstar Games is one of the most recognizable names in the gaming industry. Its franchises — including Red Dead Redemption and Grand Theft Auto — are basically licenses to print money for the company. For some reason, people can’t get enough of them — and for me that reason is cannabis.

It’s a safe bet to assume a Venn diagram showing adult gamers and cannabis users would have a pretty large middle-ground. But since the industry still isn’t directly addressing us — presumably due to the lingering stigma that we’re drug users — there aren’t a lot of reviews or analysis focused on gaming while high. That’s why we’ve chosen Rockstar as the subject of our first Highly Recommended article.

Let’s get started, shall we?

Everybody’s experience differs when it comes to both cannabis and gaming. But I firmly believe most of Rockstar’s catalog (I admittedly never played its table-tennis game) has something to offer every kind of adult gamer – except those who don’t like adult themes.

Rockstar’s games are well-known for their Hollywood-style action sequences. If you consume energetic sativa strains, these are the perfect games for the kind of amped up highs that have you playing while standing up and jumping in front of the TV. But you might be surprised at how mesmerizing the living, breathing universes that Rockstar creates can be for indica users who just want to chill and relax.

The company’s attention to detail is an endless source of bemusement for stoned gamers looking for inside jokes, running themes, and cleverly-woven stories. And whoever writes the dialogue for these games must have a master’s degree in making stoned people laugh.

Don’t get me wrong, sports games and FPS shooters are a blast to play with your pals, or even strangers online when you’re high. But for me, the impetus to play video games is no longer about being social or competitive (no disrespect, consider me retired). I more often prefer using cannabis and then getting lost in a fictional wilderness or virtual city while the kids are out and I’m off work.

Sometimes I just toke up, turn on GTA V, and cruise around the streets of Los Santos. It isn’t hard to spend two or three hours reading billboards and listening to the in-game radio stations.

You can also light up, get frosty, and go all evil-mastermind building a criminal empire in GTA Online — if that’s your thing. And, if you dig couch co-op as much as me, you should definitely try GTA V’s story mode with your best friend – in my case my fiance, who also enjoys cannabis – by taking turns passing the gamepad and the blunt (Puff, puff, jack that dude for his motorcycle, pass).

This works surprisingly well with almost all of Rockstar’s games because they’re so cinematic. It’s sometimes more fun to be the person watching than the one playing — just remember the platinum rule: either be smoking, be playing, or be passing.

But for me, someone who was raised on movies like “My Name is Nobody” and “Young Guns,” the absolute best game to play stoned is Red Dead Redemption 2. It snatches your attention and sucks you in until you forget you’re even holding a controller, from the moment you press start.

Riding through the snowy wilderness during the opening scenes of Red Dead Redemption 2, while blazed on indica — colloquially pronounced in-da-couch, because you get so mellow you just want to sit on the couch and watch TV — is like playing a scene straight out of a Quentin Tarantino movie. It’s brilliant.

Simply put, Rockstar’s titles are my favorite adult games to play when I get high, no matter which strain I’m imbibing. And RDR2 is a masterpiece no matter your level of sobriety. Plus, we haven’t even gotten to LA Noire – getting blazed and solving crimes is a unique gaming experience I can’t recommend enough — or Bully, or the original Red Dead Redemption’s crossing the Rio Grande scene. The list goes on.

You can make the argument that any video game is fun to play on cannabis; it’s a solid one. But Rockstar Games’ focus on total immersion gives them a leg up over almost every other gaming company out there. No matter how you choose to play them, or why you consume cannabis, Rockstar’s games feel like they were intended to be 4/20 friendly.

Don’t forget to check out our review of Red Dead Redemption 2 here, and our 4/20-gear gift guide here.

If you like cannabis, you’re going to love Amsterdam. Get your tickets for TNW Conference 2019 before time runs out!

Read next: Voice actor lets it slip that Horizon Zero Dawn sequel is in the works