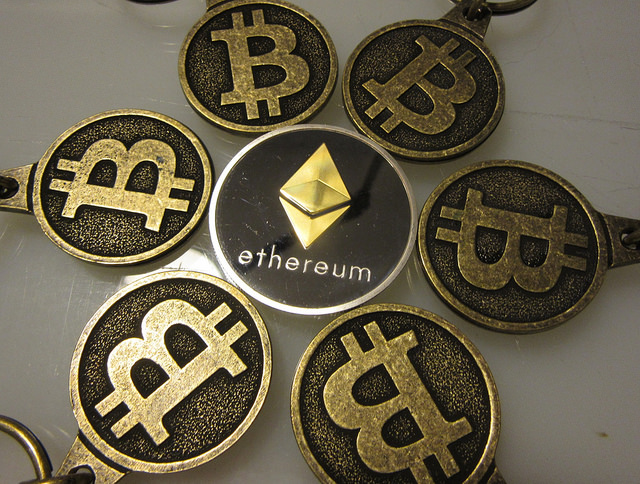 I was wrong about Ethereum because it’s such a good store of value… no wait, let me try again.

I was wrong about Ethereum because it’s such a decentra… nope.

I was wrong about Ethereum because everyone is using it as a supercomputer… No.

I do admit I didn’t see this Ethereum bubble coming, but then again I wrongly assumed that no startup would need or even dare to ask $50 million in funding and I also wrongly assumed that people would use common sense and that leading developers would speak out against this sort of practice. Quite the opposite it seems.

Ethereum’s sole use case at the moment is ICOs and token creation.

Greed of speculators, investors and developers.

Can you blame them?

Speculators and investors: No.

So let’s think for a minute and think what determines the price? Supply + demand. Pretty straightforward.

The tokens that are available on the market, right? But with every ICO there are more tokens that are being “locked up”. Obviously the projects will liquidate some, to get fiat to pay for development of their project, but they also see the rising price of Ethereum.

So at that point greed takes over and they think, totally understandable, “we should probably just cash out what we really need and keep the rest in ETH, that’s only going up anyway it seems.”

And obviously there are new coins being mined, but if you look at the amount of ETH these ICOs raise, at this point, it’s just a drop in a bucket.

You have the normal investors (who are already very late to the game at this point… as usual), but the buy pressure that these ICOs are creating is crazy and scary. Take TenX for example, it’s an upcoming ICO at the end of the month.

Another example is Bancor. A friend of mine who runs a trading group collected 1,100+ BTC to put into Bancor. This needs to be converted into ETH before the sale starts. These are decent size players, but not even the big whales who participate in these ICOs.

What will the price do next?

It can go quite a bit higher, there are so many coins being taken off the market by these ICOs, that it can still continue for a while and everyone is seeing this and thinking: “Why aren’t I doing an ICO”. There are lots more coming.

At one point it will crash, hard. What the trigger will be? Bug(s) in smart contracts, major hack, big ICO startup that fails/fucks up, network split, even something as silly as not having a decent ICO for a couple of weeks which creates sell pressure from miners and ICO projects can cause a big crash. It’s not a question of “if”, it’s a question of “when”. That being said: Markets can remain irrational for quite a long time.

Usually when a bubble like this pops we could easily see 70–80% loss of value (for reference: Bitcoin went from $1,200 to $170 after 2013–2014 bubble). This is however quite the unusual situation and I’m not sure to what kind of bubble I can really compare it.

I’m sure most of you have seen “Wolf of Wall Street”. Just re-watch this clip and see if you find any similarities with the current situation. (bonus clip)
What I really find interesting is what the ICO startups will do. Bitcoin had holders and investors mainly, individuals who most of the time had a fulltime job and didn’t need to sell.

With Ethereum there is this huge amount being held by companies who need to pay bills. Will they panic dump to secure a “healthy” amount of fiat funding, will they try to hold through a bear cycle?

Everyone loves making money, you can’t blame traders or investors from taking advantage of this hype. That would be silly. People will buy literally anything if they can make a quick buck out of it.

The responsibility here is with the developers, Consensys and the Ethereum Foundation but they don’t take responsibility since they’re getting more money. This will end with the regulators stepping in.

The reason why I say that it’s with developers, Consensys and the Ethereum Foundation is simple:

First thing that an advisor should’ve said in this case was: “Don’t do it, it’s stupid, it makes no sense.” But well there we have Mr Ethereum himself.

We all know that Vitalik has a cult-like following with the Ethereum investors so it will be very easy for primalbase to launch their ICO and use Vitalik’s face and name to get itself funded.

This is just one example, if you go through all of these ICOs you find a lot of familiar names and faces. Nothing wrong with being an advisor, but when you’re just sending people to the slaughterhouse…

The sad part is that a lot of people will lose a lot of money on this, some of them obviously more than they can afford to lose, that’s how it always goes. The regulators will step in after this bubble pops and what scares me is the fact that it will damage all of crypto, including Bitcoin, not just Ethereum and its ICO’s.

But you’re just an Ethereum hater

I’ve heard all the accusations:

For the people that are scared that Ethereum will replace Bitcoin:

Ethereum is not a store of value

It isn’t capped. Yes, I know they’re planning to switch to PoS (which it already kind of is). Do you think they managed to create the first software implementation ever without any bugs? Doing such a major change on a (currently) $30 billion market is completely irresponsible, boarderline insanity. Even if we assume that there are no bugs, what about the miners?

The miners who bought their equipment to mine Ethereum, the miners that supported the network for years. “But they knew we were switching to PoS.” Of course they knew, and do you think they’ll just give up on such a profitable coin?

Some might switch immediately to Zcash and Ethereum Classic but there will be another fork and we’ll have ETHPoS and ETHPoW, with of course all the Ethereum tokens being on both chains. Even Ethereum developers think that his is a very likely scenario.

They are, sometimes, by a bit. If you’re trying to send something when no token sale is active obviously, else you have people spending $100’s to get in on the token sale and clog up the network. Also doesn’t apply when you send something from exchanges since for example with Poloniex it’s about $1.9 vs $0.28 for Bitcoin.

Oh, and another exception is when you actually use it for smart contracts, which require more gas to process than a normal transactions from account A to account B. You know.. the actual reason why Ethereum was created.

Ethereum is not decentralized

Bitcoin isn’t as decentralized as it should be, we all know that, but compared to most other coins, Bitcoin is very decentralized. Vitalik has called himself a benevolent dictator in the past. He is the single point of failure in this project and if he gets compromised in any way that’s the end.

There is no way of knowing if this happens and since people blindly follow everything he says, he has the power to do anything. Satoshi was smart enough to remove himself from the Bitcoin project.

Ethereum is not immutable

Don’t have to spend much time on this: see DAO and split that lead to Ethereum and Ethereum Classic.

Ethereum has the Enterprise Ethereum Alliance

But but but.. all those big banks use Ethereum. No, they don’t. They use “an” Ethereum, which is a (private) fork of Ethereum. By that definition 99% of all altcoins are using Bitcoin. Still a separate chain.

The fact that we’re talking about a private blockchain here actually makes altcoins more like Bitcoin than “an Ethereum” that EEA uses like Ethereum. You can compare it to 2013–2014 when some companies started to get interested in blockchain vs Bitcoin, only difference here is that for Ethereum it’s part of their marketing campaign to lure in potential investors.

If you think I’m just full of crap, which is fair, I am just some random popular guy on Twitter who has been around from before Ethereum. Have a look at what Vlad has to say about the current state of Ethereum here and here. Vlad Zamfir is probably the smartest guy on the Ethereum team, and I say this while I don’t agree with him on many of his opinions, I do respect him.

If you’re an actual developer, be realistic and honest with your investors. Do you really ever need more than $5 mill? Finish a MVP first and then do a tokensale, if you really really need to do an ICO. Plenty of rich crypto investors and traders now that would love to be part of your project and who would be happy to just invest for equity. Yes, it will probably be less than what you can get in an ICO, but at least you didn’t sell out and it shows you actually really care about your product/service.

If you’re a trader or investor, be realistic about the bubble. I know you hear this a 100 times when you’re trading but: don’t invest what you can’t afford to lose.
I have some Ethereum, not as a long term investment, but because the price is going up and I need it to invest in tokens which I can quickly flip as soon as they come on the market.

That’s just the type of market we’re in. Everyone is making a lot of money, awesome right? What could potentially go wrong?

This post was originally published on Medium, republished here with permission from the author