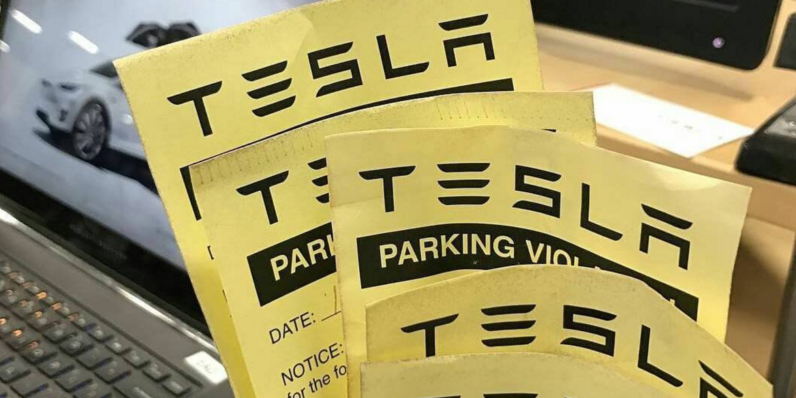 After growing over 75-percent the past two years, space is becoming a premium at Tesla. Not space as in Space-X, but something much more terrestrial — parking.

Just 30 miles away, at Tesla’s Freemont factory, employees are experiencing something else entirely.

There, 6,000 employees compete for 4,500 parking spots. It’s a problem, and one forces clever workarounds. Some employees work out barter deals with employees on opposite shifts. Others arrive early to find a space and then sleep in their cars until work begins. Or, there’s always arriving an hour or more early to idle behind another shift worker in hopes they can pounce on the spot once they do.

Then, there’s others who have given up entirely and decide to park on curbs, or block other drivers in. An employee even set up an Instagram account to detail the madness. One submission captures a note left on a windshield that read:

Next time you block 100+ people from getting out the parking lot you’re getting your tires slashed you fucking asshole. Eat a dick, kill yourself.

Tesla, for its part, is working on a solution. For now, Wi-Fi-enabled shuttles ferry workers around, but it doesn’t ease the parking issues, it just moves them elsewhere.

It seems parking woes at Tesla could actually benefit the company. Who better to create a solution to a parking situation one employee described to us as “a fucking nightmare” than the very people seeking to create technology that could erase the idea of owning a car entirely?

Elon Musk Has an Awkward Problem at Tesla: Employee Parking on The Wall Street Journal

Read next: Classic Tamagotchi are making an anniversary comeback