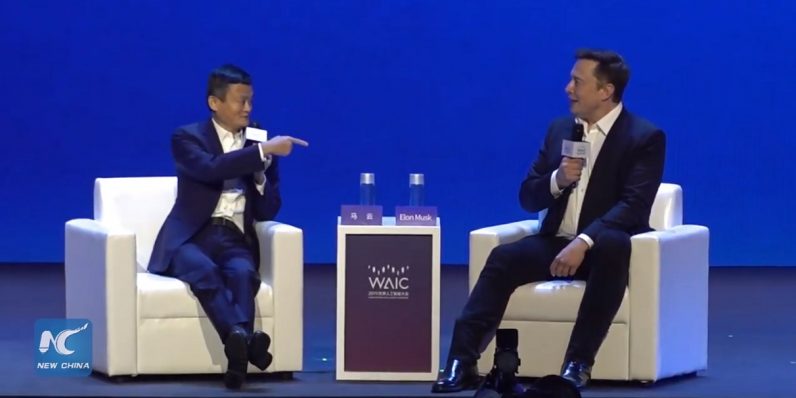 Tech moguls Elon Musk and Jack Ma took the stage last week at the 2019 World Artificial Intelligence Conference in China to talk about AI. What ensued was exactly what you’d expect from two of the most celebrated figures in tech: a strange, awkward, passive-aggressive bicker.

The 45-minute conversation was billed as a debate, but in reality it was a series of meandering TED-esque talks by Musk on how, like, Earth is totally doomed in, like, millions of years or something. Ma, a guy who once played an unbeatable martial arts master in a movie with Jet Li, was having none of it.

Musk lead with the assertion that humanity underestimated how powerful AI would become:

I think generally, people underestimate the capability of AI. They sort of think like, it’s a smart human. But it’s, it’s really much—it’s going to be much more than that. It’ll be much smarter than the smartest human. It’ll be like, can a chimpanzee really understand humans? Not really, you know. We just seem like strange aliens. They mostly just care about other chimpanzees. And this will be how it is more or less in relativity.

He goes on like this for a bit, explaining that human limitations and exponential machine-growth would lead to AI becoming god-like, to which Ma responds:

You have a vision about the technology. I’m not a tech guy. I think I’m all about life. I think AI is going to open a new chapter of the society of the world that people try to understand ourselves better, rather than the outside world. And it’s so difficult to predict the future. 99.99 percent of the predictions that human beings had in history about the future—all wrong.

And with that, mere moments into the so-called debate, we’d learned everything we needed to know. Ma was there to discuss how modern AI technology can make life better for people today. Musk was there to talk about the end of humankind and what he’s personally doing to save us all.

More Musk (on why humans should become a multi-planet species):

I think we should not take it for granted that consciousness will continue. Because we have not encountered any aliens, where are the aliens? This is the Fermi paradox. This is one of the most important questions. How come we have not found any aliens? There are people out there who think we’ve found aliens. Trust me, I would know. We have not. People ask me, “Have you been to Area 51?” Okay, please. SpaceX actually has Area 59, it’s even better, eight better than 51.

It’s important to understand that Musk appeared to be telling jokes throughout the debate, but he doesn’t pause or give any facial clues here – at one point earlier he pointed out to the audience that he’d told a joke and that it was okay for them to laugh, but it’s unclear from watching if this line was meant to be funny (it wasn’t).

Musk plowed through and explained that he believes it’s now possible to inhabit other planets for the first time, and it’s imperative our species does so as soon as possible. Ma’s perfectly-delivered response:

Good. It’s so difficult to secure the future of the earth, but we can secure the future of the next 100 years. I admire your courage for exploring Mars, but I admire a lot of people spending efforts on improving the Earth. It’s great to send 1 million people to Mars but we have to care about the 7.4 billion people on the earth. How can we make the world more sustainable?

And back-and-forth it went. Musk explained that he’s not saying we should give up on Earth “I’m very pro Earth,” but that we should spend a small amount of the planet’s resources and talent coming up with a plan to put people on Mars:

Musk‘s continued lust for space talk eventually put Ma off, prompting him to respond “Should we pick up another topic? Jobs? Jobs or life. Jobs.”

The entire talk was a study in dichotomy. Perhaps no exchange best captures the men’s different approaches to technology than this one:

Ma: Yeah, I never worry about the things that I cannot solve. I let other people solve it. If nobody can solve it, just let it be. That’s my life. Oh, let’s talk about education. I’m quite interested in education.

Elon Musk, a billionaire engineer, is hellbent on solving the biggest possible problems through engineering future technology. Ma, a billionaire investor, is an optimist who wants to solve the problems faced by people on Earth right now by investing in and developing current AI technology. These wildly different approaches serve equally different ends.

As Ma put it in one of his responses to Musk:

We need heroes like you. But we need more heroes like us, working hard on the earth, improving things every day. That’s what I want.

Read next: Pirated textbooks & essays are full of malware