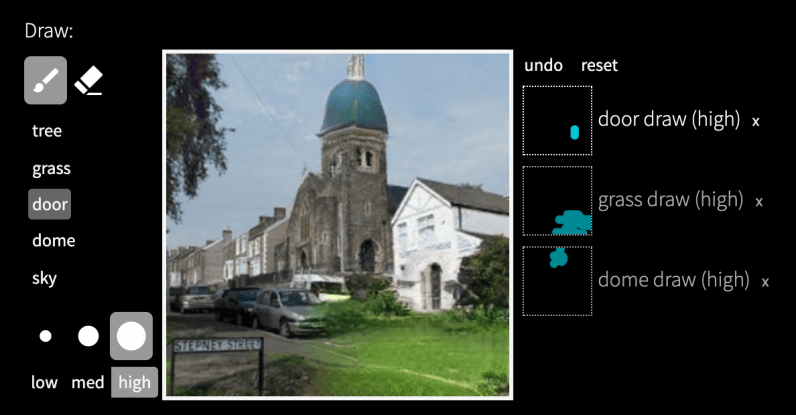 In the past couple of years, photo editing software has evolved a lot. With new AI capabilities, it’s now easier to manipulate snaps according to your need. But this new AI made by the researchers from MIT and IBM lets you add, edit, or remove an object just with a click.

In the past couple of years, photo editing software has evolved a lot, thanks in large part to artificial intelligence. Now, a new AI developed by researchers from MIT and IBM lets you add, edit, or remove objects in photographs with just with a click.

The new tool, GAN (Generative Adversarial Network) Paint Studio, lets you upload a picture and manipulate it without ruining its original details. For instance, if you add a tree or grass to the scene, related objects will be rectified so as to make the resulting image look realistic.

Take a look at the image below where I’ve added grass in front of this building.

Antonio Torralba, a professor at MIT who’s part of the MIT-IBM Watson AI lab, said that this tool has a ‘strong personality’ and will not perform an action if it thinks it wouldn’t fit the image:

All drawing apps will follow user instructions, but ours might decide not to draw anything if the user commands to put an object in an impossible location. It’s a drawing tool with a strong personality, and it opens a window that allows us to understand how GANs learn to represent the visual world.

The researchers first tested the tool by removing certain objects in the scene and observing how artifacts around the removed object were affected. They used this data to train the algorithm to make realistic modifications when an object is added or removed.

The team used a two-part network to train the model. It used generators to create samples of realistic photos, and discriminators to identify the differences between generated and real-life pictures. The input from discriminators is used to modify the generator model to make it better at creating realistic images. This method allows them to test other GANs and improve them by analyzing them for “artifact” units that need to be removed.

The team understands this tool can be used by bad actors to manipulate images in malicious ways. However, the paper’s co-author Jun-Yan Zhu believes that this tool will help researchers understand what kind of mistakes AI makes and weed out fake images.

You can try out the tool here.

Read next: Why creativity is the most important soft skill companies look for right now