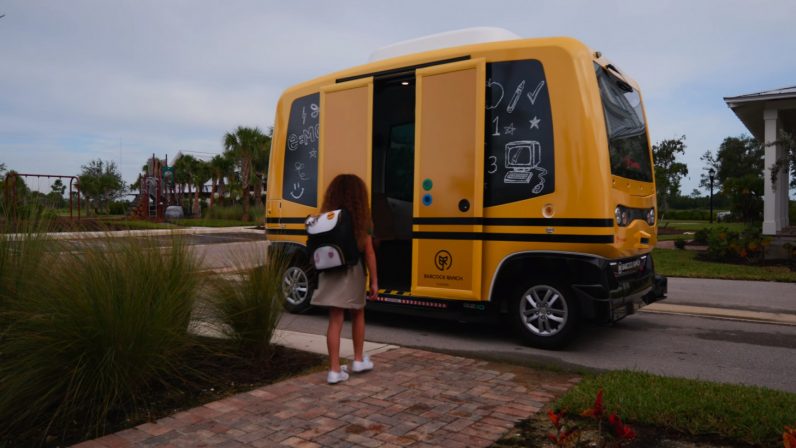 A company called Transdev debuted its autonomous shuttles in a Florida town earlier this month. Rather than test their vehicles with tourists or through a ride-sharing style service, the company is using them to take children to school. What an awful idea.

The town of Babcock Ranch, a small community outside Fort Myers, is a progressive place. Its claim to fame is that it’s a completely solar-powered community with an obvious eye towards the future. Now, it’s become the first city in the world to test autonomous school shuttles.

Autonomous vehicles are an exciting future-tech that will almost certainly revolutionize the way we look at transportation in the coming decade. But it’s probably not time for us to hand over our most precious cargo, children, and trust the machines to keep them safe. A little caution seems pragmatic here.

Don’t get me wrong, I love driverless cars. My adulation for the technology forces me to sneer at the inefficiency of allowing humans to operate complex machinery better suited for the lightning-quick reflexes of a computer. But the technology simply isn’t there yet.

According to a AAA survey conducted in April, 73 percent of adults don’t trust driverless cars. That’s actually down a bit from around 80 percent last year. A survey doesn’t actually indicate whether autonomous vehicles are safe or not, but it shows where public perception is at. And that’s important. If this Florida pilot-program goes wrong, whatever happens will be exacerbated by the fact there are children involved.

It makes perfect sense to say driverless cars are safer than their human-controlled counterparts, but there’s not enough evidence to call it a fact yet. We’re only looking at driverless cars as compared to non-driverless cars, and that’s not the whole picture.

What happens when a shuttle full of kids gets hacked? The human safety observer has to react quickly enough to use physical fail-safes, something no company can promise will always be enough. It only takes a split second to turn a vehicle into oncoming traffic.

Anyone can argue that such scenarios have been planned for, and that they’re far-fetched at best. But it’s probably safe to say nobody at a Tesla development meeting raised their hand and said “Let’s make sure our cars don’t mistake trucks for clouds and kill someone who isn’t paying attention.” It happened. We can’t plan for everything, so long-term testing is important.

According to a press release, Transdev spent months testing the autonomous shuttles for the routes they’ll be taking. They’re probably safe, or at least as safe as a regular automobile – but the unknown unknowns are what makes the prospect scary.

People have died in tragedies related to autonomous vehicles and there’s no clear front-runner among technologies. It simply isn’t time to start showing off.

I’m all for testing dangerous products at the cutting-edge, but is it really that important to be the first autonomous shuttle to drive kids to school in a world where driverless cars are little more than a novelty?

Read next: Blockchain.io wants to reshape your experience with cryptocurrencies