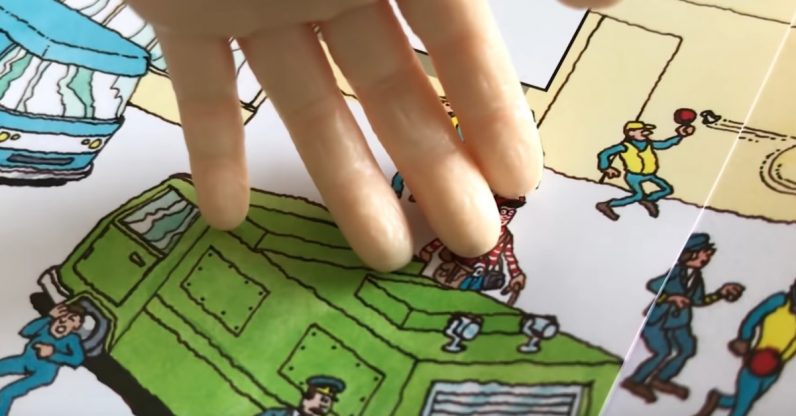 A rubber-handed robot has proven it’s more of a whiz at “Where’s Waldo” than most humans, and it’s been given the appropriate name “There’s Waldo.”

The robot has cut its hunting time down to a mere 4.5 seconds — “better than most 5-year-olds” says the video’s rather harsh description. Watch the little rapscallion smack the crap out of Waldo’s pudding-like face here:

Don’t watch the video if you don’t want to be spoiled. You know, if “Where’s Waldo” is your thing.

Created by the creative agency redpepper, the little arm is controlled via a Raspberry Pi. Matt Reed, Creative Technologist at Redpepper, trained Google’s AutoML Vision AI service to recognize Waldo using a series of images. The Raspberry Pi hovers over the image, snaps a photo, and the AI analyzes all the faces in the image. The robot than puts its finger on the face it’s more than 95 percent certain is Waldo.

Taking away the image of Waldo, the robot is by itself a nifty visual of the power and speed of AI facial recognition software. If you want to see a good demonstration of how fast a well-trained AI can pick someone out of a crowd, here you go. Though it should be said most humans are more defined and — let’s face it — beautiful than the likes of Waldo.

Reed proposed an alternate use of the AI to The Verge: “Maybe a fun use would be seeing what cartoon character the AI thinks you look closest to? Maybe could detect comic book forgeries?” And sure, why not? Though I know I’m a dead ringer for Rogue from the X-Men and no one will convince me otherwise.

You could argue it rather defeats the purpose of “Where’s Waldo” to have a robot find that stripey idiot for you. Personally, I find Waldo’s fashion sense to be so galling I don’t care to find him, so more power to the robot. It might spoil the fun for a child, but show me a child capable of using an AI-powered Raspberry Pi rubber hand thingamajig, and I’ll show you a child that shouldn’t be insulted with the likes of Waldo in the first place.

This Robot Uses Computer Vision to Find Waldo In 4.5 Seconds on Motherboard

Read next: Emoji update proposal includes 55 different couples -- where are the gingers?