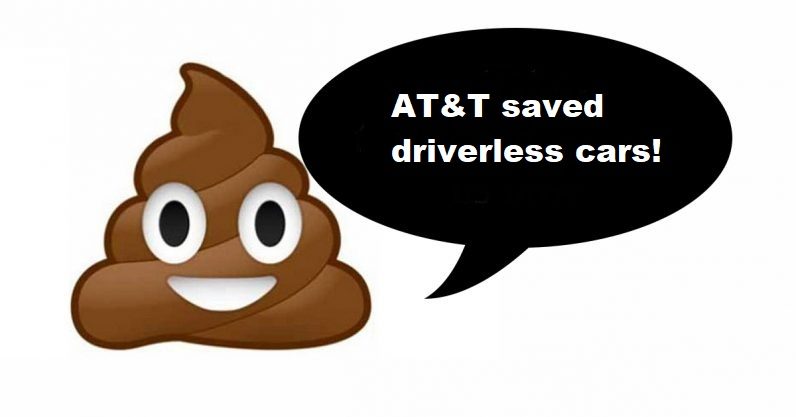 AT&T supports all of you who are out there right now fighting to have the net neutrality repeal overturned. It’s just dissapointed. And if you don’t stop, it’s going to take away your video games and your car.

In a company blog post, Bob Quinn, AT&T’s Senior Executive Vice President of External & Legislative Affairs, claims people have it wrong when it comes to fast lanes and throttling. “But no discussion of net neutrality would be complete without also addressing the topic of paid prioritization. Let me start by saying that the issue of paid prioritization has always been hazy and theoretical,” he says.

Well, we’re off to a bad start Bob. Because there’s nothing hazy or theoretical about paid prioritization. As Ars Technica reporter Jon Bodkin points out, the FCC, under the 2015 net neutrality act, already let ISPs set aside bandwidth for certain applications without violating its paid prioritization ban.

So not only is everything Quinn says afterwards misleading, but it’s also based on a bullshit premise.

For example, when Quinn says:

Let me [be] clear about this – AT&T is not interested in creating fast lanes and slow lanes on anyone’s internet. What we do care about is enabling innovative new technologies like autonomous cars, remote surgery, enhanced first responder communications and virtual reality services, which are real-time interactive services that require end-to-end management in order to make those services work for consumers and public safety.

It’s almost as though he’s trying to make us believe that AT&T was crippled before, and now it can finally support innovation. But that’s a lie. And it would also be a lie if he came out and said that technology like VR, driverless cars, and robots that perform surgery relied on AT&T internet services to operate. Because they don’t.

First, for a car to be autonomous it has to rely on its own sensors, not information from a network. But even if we concede he meant “driverless” cars, you still have to wonder how the hell repealing net neutrality affected that.

Because Quinn obviously knows that his company doesn’t just sell Google or Ford a $39.95 a month broadband package. Net neutrality was about consumer protections: we’re worried AT&T is going to charge us more to connect our Tesla to its network than it would someone who owns a car it’s “partnered” with, or only offer its fastest service to owners of a specific make, for example.

Nobody is stupid enough to believe the net neutrality debate was about giant tech companies suffering while AT&T and Verizon were powerless to help them.

But, Quinn must be counting on us being ignorant when he says:

Both sides of this debate can continue to live in a world where we throw shade at one another and call into question each other’s motives, or we can put history aside and work together to provide consumers the internet they want and deserve. On this Day of Action, rather than support a CRA process, which only delays us from really providing consumers some basic protections on the internet, AT&T supports the opening of a dialogue to solve this vexing issue through legislation once and for all.

It’s worth pointing out, some of us don’t even think the CRA has a snowball’s chance in hell of succeeding because it has to clear President Trump’s desk.

But, if we’re not fighting to overturn the repeal, those who believe in net neutrality should be focused on preventing people like Representative Marsha Blackburn from passing laws stripping individual US states’ authority to enforce their own net neutrality laws. And if you’re wondering what Rep. Blackburn and AT&T have in common, the answer is $80,750.

So, for the record Mr. Quinn, we’ll continue to question the motivations of, and throw shade at, any person or company in tech that lies to or sells out the American people just to make more money.

Read next: The culture of crypto mining is changing: here’s how