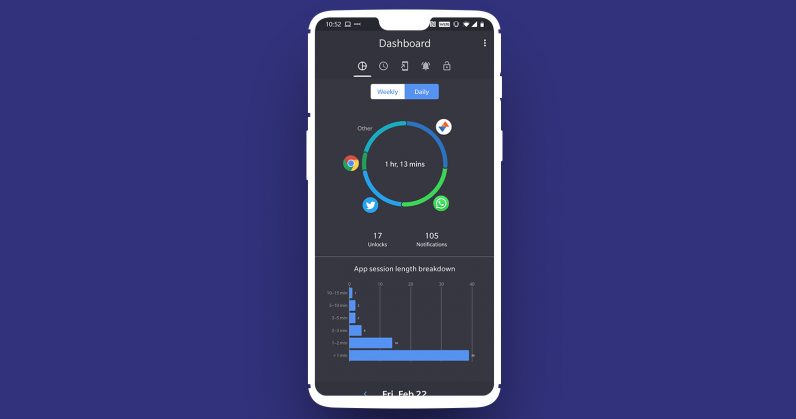 Google showed off Digital Wellbeing several months ago as one of the most compelling new features in Android 9.0. The tool, which is designed to help you monitor and limit your app usage, so you spend less time glued to your phone. Sadly, it’s taking forever to become available on non-Pixel handsets.

If you’re like me and can’t wait to kick your screen addiction to the curb, you’ll want to check out ActionDash. It’s developed by Chris Lacy – who’s behind other solid apps like Action Launcher and Link Bubble – and arrived in the Play store last month with a price tag of $0, and support for phones on Android 5.0 and newer. After running it for a few days, I’ve found it useful for visualizing how much time I waste on social networks.

ActionDash logs the time you’ve spent using apps on your phone, and displays that data in simple graphs and charts. You can also see how many notifications you receive from each app, as well as how many times you launch these apps per day and per week. Digital Wellbeing does the same thing – but being a system app, it has the added capability of restricting access to apps that you specify.

While ActionDash is missing that last feature, it’s still handy for reminding yourself about how you’re spending your time, and how you aren’t.

I’ve been trying to cut down on the number of times I fire up Reddit, for example, and I can see that I’m making some minor progress on that front. Meanwhile, I’ve been boasting about reading more books on my phone over the past couple of months – but ActionDash tells me I haven’t been flipping many pages at all this week.

Visualizing this data about what I do with my spare time is certainly helpful, because it’s got me thinking about how I could utilize those precious minutes better. Seeing it on a circular chart, alongside the time spent with apps I use for work, puts things in perspective too.

For what it’s worth, Google has just begun rolling out Digital Wellbeing to some Nokia and Samsung phones, so it shouldn’t be long before other brands’ devices get it as well. In the meantime, ActionDash plays a great understudy. It’s free for the most part; ponying up a one-time fee (I paid INR 100 in India, but in the US, it’ll cost you $7) unlocks a dark theme, the option to back up your data, and view extended stat history. I highly recommend trying it out to help ditch your time-wasting apps.

Read next: thiscatdoesnotexist.com is, uhm, not as good as its human counterpart