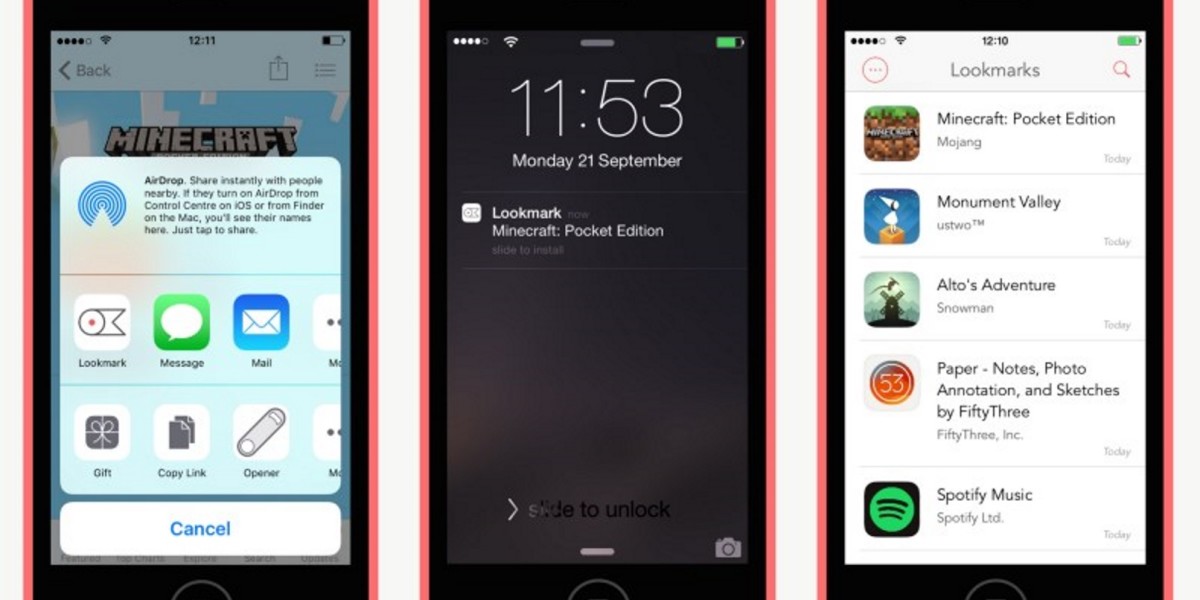 Yes, November has already started and yes, Christmas and the best apps of the year roundup are just around the corner – but there’s still enough time to bring you some of the best new and updated iPhone and iPad apps from last month.

From big names like Google and Instagram to lesser-known apps that can help you monitor air quality levels and mash up photos in group chats.

And if that’s not appealing, you can always go and play Minecraft: Story Mode, which also arrived in October.

Adobe Lightroom has been available on iOS for a while now, but it previously required a subscription to Creative Cloud to be of much use.

Now it’s free and can be used locally on your iPhone or iPad without any other subscriptions or desktop app requirements – it’s a completely new standalone app with a more powerful set of image editing features.

Android owners will have to wait a little longer for the same treatment.

If you answered ‘yes’, go and check out Boomerang’s one second looping videos immediately.

Made with Instagram's new Boomerang app.

As you might expect from an app that lets you make one second videos, it’s not all that complicated. Just press one button to record and you’re done.

The shared videos are actually four seconds long and create their GIF-like appearance by playing once, rewinding and then repeating.

It’s available for both iOS and Android.

Restricted to users in the US and Canada, Twist displays visual replies side-by-side or atop of one another in pairs.

You can use images from your Camera Roll, or from a Bing image search.

Google continued its push into gaming last month with new features for YouTube Gaming on iOS that eventually also made their way across to Google Play Games on Android devices.

While there are a couple of other small tweak to YouTube Gaming, the most notable addition is the ability to capture gameplay without the need for special hardware.

Non-gamers probably won’t care much, but this is a big deal for those who love mobile gaming.

YouTube Gaming is, unsurprisingly, available for Android devices too.

This one needs little introduction. It’s mobile. It’s Minecraft. But not as you know it.

You play as Jesse in a choose-your-own-adventure-like spin on Minecraft that sees you venturing across Overworld. In the first episode, you’re tasked with saving the world from a monster.

So, nothing too challenging then.

Each episode does cost $4.99 to download though, so you’ll end up spending some cash if you want to play all the episodes. It’s also available on Android devices for the same price.

If you’re forever discovering apps you like the look of, but then forget about them later on, then Lookmark is the app for you.

Simply, it’s a bookmarking app for apps you stumble across. It’s also available as a Chrome extension.

If you want to remember to download a specific app while browsing the Web, you can just share it to Lookmark via the ‘Share Sheet’ option.

Just go and get it now before you forget.

Plume for iOS and Android is an air monitor that keeps you up to date on current pollen levels and a whole lot more.

It uses World Health Organization’s guidelines on air quality collected from over 11,000 stations in 30 countries to produce its ‘Plume Index.’

As well as telling you what the air quality is currently like, it also uses this historical data to predict future conditions too.

It’s a bit niche, perhaps, but if you care about knowing about things like air quality, then Plume is free and worth a look.

Looking for a little timeout from the stresses of the modern world? Perhaps you’re freaking out about the pollen count today. Whatever it is that’s getting to you, PAUSE wants to help make you a little calmer.

It uses ambient sounds to relax you initially, and then asks you to place your fingertip on the screen and map out a shape that pulsates as you move it across the screen.

The company claims that using it will have a calming effect on your brain activity and help soothe your mind.

That’s not a viable excuse for not doing anything at work though.

Medium got a big makeover last month across its Web and mobile apps, which focus on making writing a whole lot easier while on the move.

Along with a new lick of paint, and support for iOS 9 and 3d Touch, the updates also bring a new sync feature that means changes made on desktop and mobile are automatically reflected on each platform.

The update also rolled out to Android devices, along with a couple more Google-specific tweaks.

Yep, Google owns Waze, but nope, this update’s not available to Google’s own mobile OS from launch. Android will get it eventually, though

The most notable change is the overall redesign aimed at reducing the number of clicks between you getting in your car and getting on your way.

Other notable updates include a new map design and alerts, and a revised ETA panel with new options.

Can you guess what this app does from the name alone?

It has one job, and does it well: it turns Apple’s Live Photos into wholly more shareable looping GIFs.

If you love GIFs but don’t like handing over money for making them, as with Live GIF, then VSCO’s DSCO app might be right up your street.

Pronouced ‘disco’, the app lets you long-press on your screen to capture the frames for your GIF and once the colorful bar completes its lap of your screen (or you lift your finger off) a GIF will be automatically created.

If you’re more ‘enthusiastic’ about graphic design than you are ‘experienced,’ then Assembly for iOS is probably a solid place to start, though it’s not useless for more experienced designers.

In a nutshell, it walks you through the process of creating original projects, after asking whether you’re a beginner, intermediate or advanced user.

Projects are arranged into three sections: Artboard, Shapes and Styles. Artboard is a canvas you can draw on, fill with a color or insert a photo on as your base.

There are nearly 200 shapes to use in your designs but you’ll need to cough up additional money to get access to the various packs for $0.99 or $5.99 for a ‘Forever Unlock’ pack, which gets you additional shapes as they are added.

And the Styles section lets you modify any of your shapes, such as the opacity, thickness of lines, shadows etc.

If 13 of the best new and updated iOS apps isn’t enough for one month, then check out last month’s roundup or our list of 65 of the best iPhone and iPad apps from 2014.

Read next: Contrary to some Twitter users' opinions, using the new heart doesn't make you gay