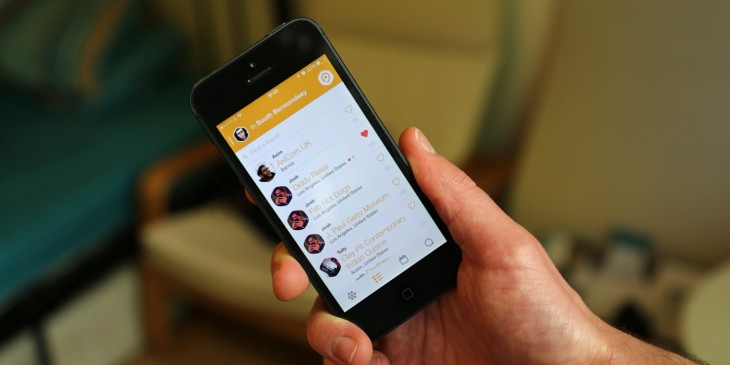 Foursquare was founded on check-ins. When the original app emerged in 2009, it blossomed on the idea that you could broadcast your location and see where your friends were, all while earning playful badges, points and mayorships.

It was this reputation that caused such a stir when Foursquare announced plans to pull these features and move them into a new app called Swarm. While the company developed its core offering around exploration and recommendations, it sought to preserve some of its legacy in a new, lightweight experience.

Today, the app launches on iOS and Android.

Foursquare chief executive Dennis Crowley says his company never set out to “build an awesome check-in button.” After using Swarm for a few days, I understand where he’s coming from. The check-in was a tool to share where you were and, conversely, see where some of your closest friends were hanging out. The badges and points were a distraction from that; Foursquare was simply using them to improve the onboarding process and accelerate check-ins.

In the Swarm app, the original check-in format takes a back seat. Foursquare is pushing a new, optional feature called Neighborhood Sharing, which offers your general location to friends. Although some will bristle at the notion of sharing such information at all times, in practice it makes a lot of sense.

For one, you don’t have to remember to check-in everywhere. Over the years, Foursquare has worked hard to reduce the time required to perform a check-in, but there’s still some friction. It takes a few seconds to boot up the app, check that it’s recorded your whereabouts (accurately) and if not, search through its directory for the proper venue. The mere act of taking out your smartphone and checking in can also be frowned upon when you’re with other people.

With Neighborhood Sharing, all of that upkeep is taken away. Just swipe once and your general location is always available to your closest friends – until you turn it off again, you can close Swarm and forget it even exists.

Passive tracking also ensures that your feed is up to date. In the existing Foursquare app, someone might check into Starbucks and then wait hours before checking in somewhere else. In the meantime, you have no idea where they are or what they’re doing. If more than an hour or two has passed, it’s usually safe to assume the check-in has become antiquated.

Passive tracking means that your location and those of other Swarm users is always up to date. You might not know their exact position, but the new system means you’re more likely to receive a timely notification when they’re close by. That means more spontaneous gatherings and a more useful app.

The setup also makes sense because Foursquare is no longer pushing its long-standing gamification elements. The check-in was a singular object for calculating these metrics – now that badges and points have been removed, it’s possible for Foursquare to adopt a more fluid and flexible system.

Check-ins are still useful though for telling people exactly where you are. Swarm’s fresh design encourages you to post a short status update with each check-in, as well as a small colorful sticker to convey your mood. Additional stickers can also be unlocked once you’ve hit certain check-in requirements, creating a collectible aspect reminiscent of Foursquare’s old badge system.

I always struggle to make plans. Our lives are complicated and as we get older, the problem only seems to get worse. Facebook is my default service for organizing a meetup with friends, but setting up an event page has always felt quite time-consuming and old-fashioned.

In its new Swarm app, Foursquare is tackling the problem with a feature called Plans. It’s a self-contained messaging hub, which facilitates short-form conversations with a potentially infinite number of people. After posting a quick message, anyone that you’re connected with on Swarm can respond and say whether they’re interested. It reminds me of Twitter’s early days.

The execution is simple and solves an age-old problem. The caveat, of course, is that you’ll need your entire network to be using Swarm – otherwise you’re only broadcasting to a small slice of your social circle. Although this feature wasn’t available while I was testing the app, I can certainly see its appeal. Plans aren’t directed at specific users, so while there’s a higher chance that someone you know will respond, there’s no expectation or duty for them to do so.

The rest of the Swarm app is rather familiar. A standalone feed lists your friends’ check-ins in chronological order and each user has a dedicated profile page so you can see exactly where they’ve been. It’s essentially the current Foursquare app, but with all of the discovery and recommendations stripped out.

Personally, I liked the interplay between the two. Check-ins ultimately drive Foursquare’s recommendations and exploring both inside the same app was a reminder of that relationship. Even when I didn’t care for badges, I knew it was worth checking in to improve Foursquare’s algorithm.

Now that check-ins are part of a separate app, I feel differently about them. Swarm is a throwback to what Foursquare used to be about – finding nearby friends. It’s an element of the original experience that many people have simply forgotten about. I don’t criticise the company for focusing on recommendations, but Swarm solves a problem that still persists – knowing where your friends are and meeting up with them when the chance arises.

Mayorships still exist inside the Swarm app, but I wasn’t able to test the feature. Foursquare is calling the new setup ‘Mayors 2.0’ and will offer duplicate mayorships for different friendship circles. “So you and your friends can compete for the mayorship of your favorite bar, without having to worry about the guy who is there every single day,” the company said in a blog post.

Swarm is a well-made app, but to succeed it needs to build the same vibrant user base found on Foursquare. There will be a crossover period while the company readies its redesigned Foursquare app, but after that Swarm is on its own. The service will also need to compete with Nearby Friends, a new feature from Facebook that lets you share your current location and receive push notifications when people you know are passing by.

As always, the Swarm app will thrive or die based on its community – and without badges, it could be a little harder than before to tempt newcomers.

Read Next: The big thing Foursquare left out of Swarm: Check-in points. I’ll miss them / Foursquare is splitting its service into two apps: Swarm for check-ins and Foursquare for discovery / Ahead of Swarm’s release next week, Foursquare freezes mayors ‘for the time being’ and drops ousting feature

Read next: Memeoirs now turns your WhatsApp chats into a book