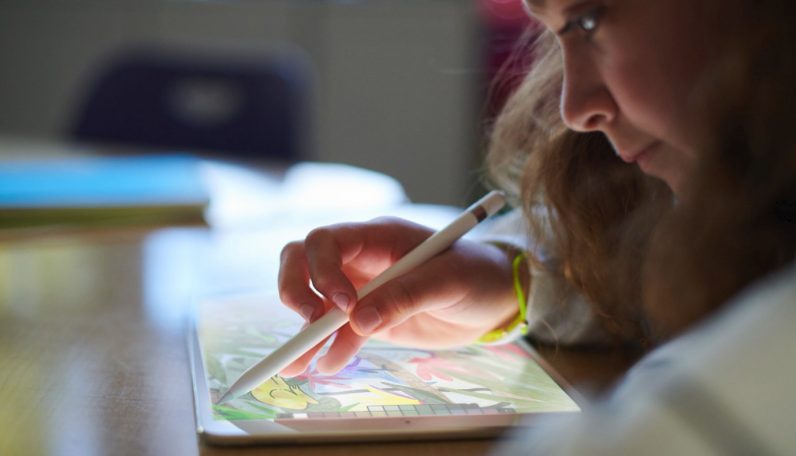 Apple announced a new iPad earlier this week at an education-focused event. Though it’s rare for the company to directly acknowledge its competition during presentations, it made no secret the new iPad was aimed at one rival in particular: Chromebooks.

The ePad, as some call it, came in at the same $329 price tag as the previous model ($299 for schools), but includes a faster processor and support for the Apple Pencil. At the same time, Apple announced a suite of new software tools to make the iPad more useful for academia.

Apple arguably has more clout than any other company in the tech industry, but it’s yet to nail the education market, which Google has completely dominated in recent years, at least within the US. The new iPad certainly improves things, but Apple misses the mark on what makes Chromebooks so great for schools.

Let’s break down the iPad’s weaknesses:

When Apple set a date for its education event, rumors and speculation suggested Apple would be releasing an iPad costing around $250. Instead, the new iPad starts at the same $329 as old models. It’s more of a standard feature upgrade rather than an entry really designed with schools in mind. Compare that to the variety of Chromebooks that can be found for sub-$200.

We never expected Apple to create a bargain bin product, but some concessions for price are reasonable. But Apple, prideful as ever of its hardware, doesn’t like to make concessions. Does every iPad, especially one aimed at school children who break things, have to feature a metal unibody (I thought the iPhone 5c was neat)? Will third graders really lament the lack of a Retina display?

No, but for better or for worse, Apple’s modus operandi is to sacrifice some value and practicality for design and quality. In this case, it’s for worse (though some would disagree).

iPads are flexible devices, but they give schools and students few options to meet their budget and necessities. Chromebooks, on the other hand, range from extremely cheap laptops, to stylus-toting 2-in-1s, to premium laptops. More recently, Google is making proper Chrome OS tablets as well.

Living in Apple’s walled garden always limits your choices. That’s okay for adult consumers who can afford to spend more money make purchasing decisions as individuals, but for school districts with tight budgets and poor students, that lack of flexibility is a real deterrent.

This extends to software. Even when using iPads, schools will often use Google apps because they work across a variety of devices. If you’re using GSuite, those apps will work for students whether they’re using a Chromebook, an iPad, or a Windows PC at home. Apple solutions work best when you commit all or nothing to its products – something that simply isn’t practical for many school districts.

And that’s not even factoring that in order to provide all the experiences Apple is promising, you need to buy accessories separately, potentially adding hundreds to the iPad’s base price. The Apple Pencil is an extra $89 for schools, $99 for individuals (although Logitech makes a $50 alternative without pressure sensitivity). If you want to connect it to a projector, TV, or USB device, you’ll have to purchase accessory dongles.

And that doesn’t even include the most important accessory of them all.

The most obvious critique against the iPad is possibly the most important one. The iPad doesn’t have a keyboard. Apple didn’t even think it was necessary to create an official keyboard for schools, leaving that task to accessory makers. And that’s not even getting into the questionable typing experience on tablets in the first place.

The iPad is an excellent media consumption device, and its powerful processor can be an extremely valuable accessory in classroom lessons and experiments, but when it comes to day-to-day work, kids need a keyboard and mouse.

Typing papers on a tablet screen is even less comfortable than on a phone (I know, I’ve tried it). Doing research on multiple topics is a hassle without proper window management and a mouse to copy and paste text.

After speaking to a few teachers, the iPad’s nature as a media consumption device translates to its use in the classroom too. Simran Kaur, a high school history teacher in New York, uses both iPads and Chromebooks in her classes. She says the Chromebook is where the main work gets done, while the iPad is mainly for watching things and supplementary activities.

Of course, teachers have different styles, and different courses will have different requirements; there are times education apps may be more valuable than the more traditional typing and computing experience of a Chromebook. iOS apps are, on average, more polished than even the best web apps (or Android, for that matter). And the Apple pencil is possible the best stylus experience short of a high-end Wacom.

Still, while iPads can certainly complement a more traditional laptop experience, it’s hard to imagine a world where, in its current form, the iPad can replace Chromebooks. In a recent piece for The Verge, teacher Alice Chen suggested educators were more comfortable using Chromebooks in class because of their familiarity with a traditional laptop. That familiarity will necessarily affect school purchasing decisions.

It’s also worth noting that for some younger students, especially those who can’t afford a computer at home, the devices they use in classrooms will be one of their primary interactions with computers. A Chromebook’s traditional design translates better to the “real” work they might have to do later in life.

All of this isn’t to say Apple’s new iPad isn’t a valuable update for consumers, nor that Apple didn’t make some important strides for education (200 GB of free iCloud storage is sweet!). But Apple’s unwillingness to compromise on its design and walled garden means it does compromise on the flexibility necessary in an academic environment.

Meanwhile, Chromebooks are only becoming more flexible. Where iPads have hardly fundamentally changed since the original, Google has significantly improved Chrome OS with new form factors and price options, Android app compatibility, and stylus support.  Short of having Apple’s software, Chromebooks can do most of what an iPad can and more. The new iPad is better for schools than ever, but if Apple wants to make a dent on the Chromebook’s market, it will have to evolve its tablet – or create something else entirely.