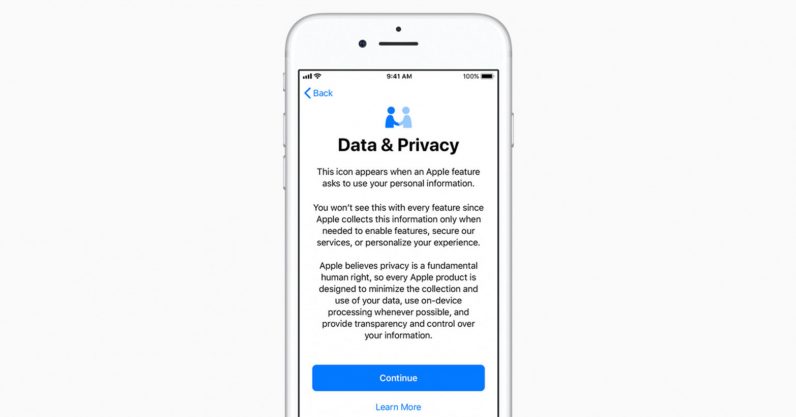 Facebook is having a bad time after the Cambridge Analytica scandal, and concerns over data privacy have entered public consciousness more than ever. Now, Apple is adding a feature to its devices to assure users it won’t use data without their permission. More specifically, it’ll try to do so transparently, rather than catching users off guard or sneaking details inthe  Terms of Service than nobody actually reads.

iOS 11.3 and macOS 10.13.5 include a new privacy icon that will show up any time “an Apple feature asks to use your personal information.” The icon, which looks like two blue people shaking hands, is there to alert users when an app calls for access your personal details, and will provide users with specific information on how their data is being used.

According to Engadget, Apple has been working on the feature for some time in response to the EU’s General Data Protection Regulation, which kicks off on May 25. So no, Apple isn’t just pushing the feature to avoid Facebook’s mistakes, but it certainly can’t hurt.

One of the biggest problems surrounding data privacy is unethical design. Apps usually technically tell you their data is being used in some tiny text in the ToS or a quick pop up you click past. Having an overt visual telling you your data is being used is a small gesture, but one that can have a significant positive impact on transparency. And starting in May – in compliance with GDPR, Apple will allow you to download and correct the data it has on you – or delete the information entirely.

Hopefully app designers themselves will follow suit. Data collection is an important part of improving software, but so is an honest conversation with users on how that data is being used.

iOS 11.3 is available today on Apple