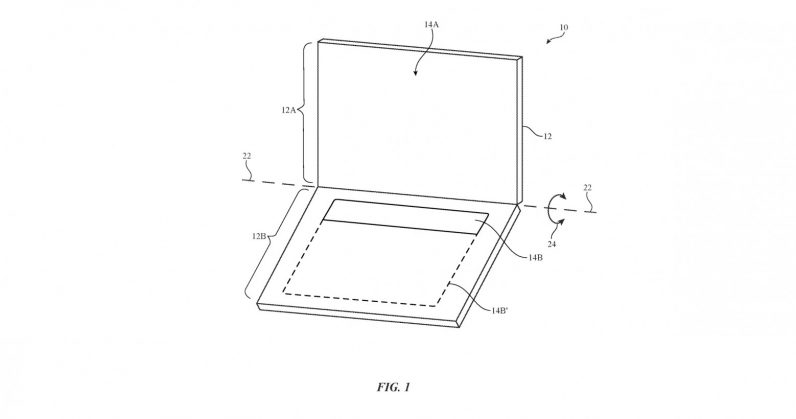 A recently granted patent shows Apple is exploring the idea of a “dual display” laptop or iPad that eschews physical keys. Titled “dual display equipment with enhanced visibility and suppressed reflections” the patent details a device that could act, essentially, as a giant Touch Bar — switching between a keyboard and content-specific controls.

The documentation shows two different configurations: one with a permanent hinge and another that allows the second screen to be removed and used separately, a la Microsoft’s Surface Pro and other two-in-one devices. It also says the device’s main screen would be an OLED display with the secondary device being an LCD screen.

It’s an interesting idea, one that could turn the space once reserved for typing into a highly configurable workspace with numerous options for artists, video editors, and casual web browsers. Apple’s Pencil, for example, could be used as a primary input device on a MacBook, and artists could make use of digital tuning knobs, color palettes, and drawing tools that make better use of the space below the main screen.

But it’s also forcing users to type on a flat surface without the tactile feel of physical keys. So, there’s that.

As usual, it’s worth reminding everyone that a patent is just an idea, and one that is equally likely to end up in the trash as on a future Apple product. And this one, honestly, seems more likely for the former than the latter — at least until someone figures out a way to make flat keys “feel” like real ones.

Read next: Demon's Souls is a perfect example of why preserving online games is so important