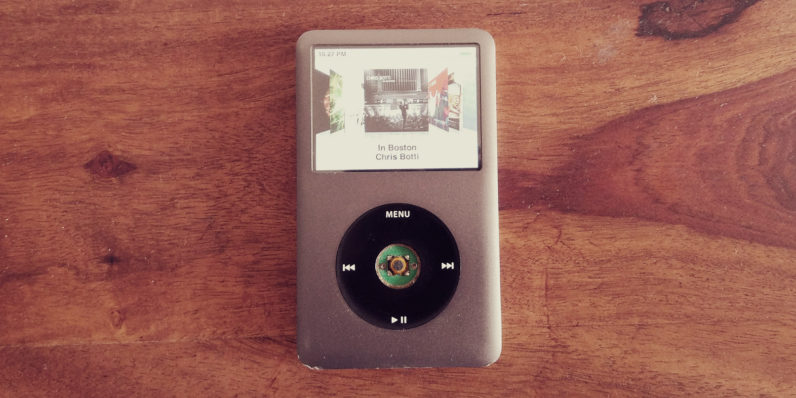 As the iPod turns 15 – Apple first announced it on October 23, 2001 – it’s dawned on me how much music consumption has changed in the almost-30 years I’ve been alive, and at the same time, how little it’s changed for me.

I went from tearing through my parents’ audio cassette collection to spending several hours to download individual MP3s on Audiogalaxy and IRC channels, to owning a CD walkman that could play MP3 discs (traditional CDs were around, sure, but they were awfully expensive and I only had a couple growing up).

Now, people have access to practically every song ever recorded, with nary a cable in sight. We’ve come a long way, but I still find myself listening to music the way I did back in 2007, when I got my first iPod.

In addition to carrying a huge portion of my ~300GB library – that’s about 5,300 albums – and allowing me to avoid streaming mobile data fees, it’s the most relevant music discovery tool I’ve ever used, even in its slightly damaged state as you can see above.

As you may have surmised, it’s difficult to get through that many albums in a few years. However, when I’m commuting or traveling, I can rely on my trusty iPod to serve up tunes that made their way into my collection because they were noteworthy in one way or another: Lauded in a review in a magazine or blog, recommended by a friend or music mentor, or discovered using SoundHound while on solo trips.

I have my iPod to thank for a number of artists whose music has stayed with me over several years: British downtempo collaborators Zero 7, melancholic rockers Elbow and Japanese post-rock wizards Toe. I came across them while shuffling through tracks on trips to hill towns around my native city of Bangalore, and I couldn’t be more grateful for those experiences.

I recall having a conversation on Twitter recently about whether people still buy albums, in which I ecstatically chimed in that I continue to be a collector. The discussion quickly turned to pricing, and it was pointed out that a single 8- or 10-track album costs as much as a month of unlimited streaming on a leading service like Apple Music.

There’s no doubt that paying for streaming nets you more music for your money, but for me, purchasing an album allows me to curate and savor it the way I want.

I’m old-school like that, and this probably isn’t the way most people consume music nowadays – but I find the process of sticking with an entire album, getting used to the sequence of tracks and enjoying an artist’s entire year’s worth of work at a stretch more meaningful and satisfying than flitting between trending tracks by a range of musicians on the top charts.

My iPod made that possible for me all those years ago, and it continues to be my favorite gadget for listening to music. It’s now a discontinued relic that few people will care for, but to me, it represents hundreds of hours of discovering excellent music, experiencing a range of emotions in solitude and learning about who I am. I still rock one to this day, and I hope to always have one on me for years to come.