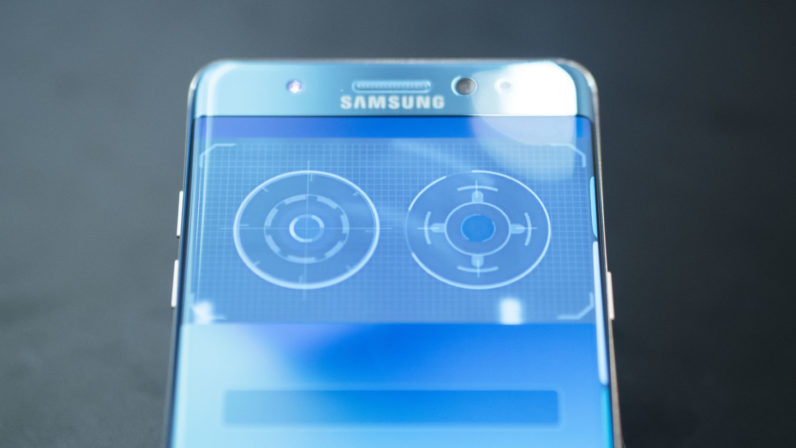 The latest 2017 iPhone rumor indicates that Apple is looking to copy a feature from Microsoft and Samsung for the 2017 iPhone: an iris scanner.

As noted by MacRumors, a report by DigiTimes had previously indicated an iris scanner would launch in 2018, but a new report by Chinese website MoneyDJ suggests there’s been an uptick in requests from Taiwanese supplier Xintec (an affiliate of an Apple manufacturer). The company is expected to begin mass-producing iris scanners next  year, although it would not comment on the report.

Yes, this is a rumor for next year’s iPhone when the 2016 one hasn’t even been announced, but it’s an interesting rumor for a few of reasons. We’ve been told Apple is planning on removing the home button on the 2017 iPhone, so the iris scanner could very well be a way around losing TouchID.

That said, I find it very unlikely Apple would go with iris scans alone as an authentication method.

This was a big fail with Microsoft’s Lumia devices. The scans worked pretty fast, but we’re generally not any faster than fingerprint sensors, and relied too much on lining up your eyes with the scanner. I  imagine Apple would increase the scan range and speed it up further, but unless it can make it work from virtually any angle you can use a fingerprint sensor, going only iris scanner sounds like a bad move.

Besides, previous rumors indicated Apple would find a way to integrate TouchID into the display (it’s already possible). If the iris scanner is real, I think Apple is more likely would try Samsung’s two-pronged approach: TouchID for general security, and iris scans for a deeper layer of security – or as a backup when Touch ID is inconvenient.

Of course, this functionality could be replicated with secondary password or fingerprint, but people are terrible at creating passwords and the iris scanners typically have lower false positives than fingerprint scanners and are harder to spoof.

But really, having a secondary for of authentication is just useful for those times the fingerprint scanner is inconvenient. If it’s drizzling outside or your hands are otherwise wet, fingerprint scanners tend to fail. In the winter, I came to appreciate the Lumia 950’s iris scanner for speeding up logins without having to remove my gloves or enter a password.

To be clear I wouldn’t expect the iris scanner to become more popular than TouchID. I definitely use the fingerprint scanner much more often on the Note 7, but the iris scanner has already come in handy multiple times. I’ve used it for keeping files in the secured folder (ideas for an anniversary gift) – or when I’m just getting out the shower and my hands are wet.

Basically, having two methods of biometric authentication is certainly better than one.

With rumors suggesting a curved OLED display, the removal of the home button, and now an iris scanner, next year’s iPhone – the 10th year anniversary model – is shaping up to be possibly the most radically different iPhone since the original.

Read next: PewDiePie got suspended from Twitter after making an ISIS joke