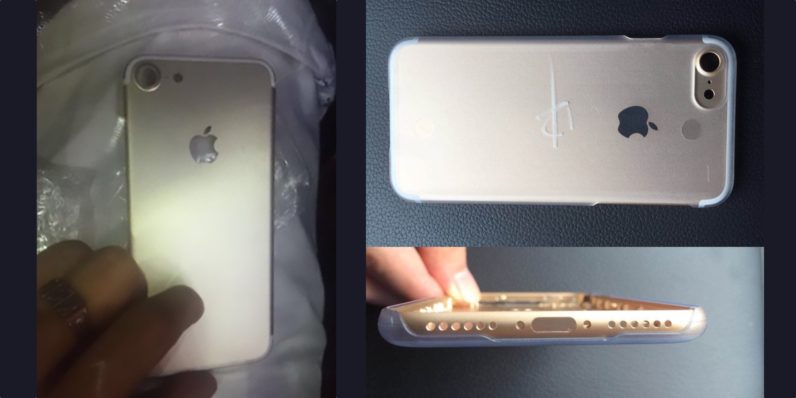 The iPhone 7, expected to debut this Fall, is currently tumbling through the rumor mill. The latest involves what is being touted as the phone’s machined casing, which details a few previously heard rumors like the absence of an audio jack.

Replacing the audio jack on the iPhone 7 will be a second speaker grill. It’s apparently that simple; ditch the headphone plug, add a speaker. ¯\_(ツ)_/¯

The other point of contention involves the camera. We’re seeing both a ‘normal’ camera cutout, as well as a much larger one believed to be for a dual-camera hardware offering some say will be found only on a ‘Pro’ model of the iPhone 7.

Oddly, the iPhone 7 seen in these images has what I’ll refer to as an ‘official’ camera bump. On the iPhone 6 and 6s (and Plus!), the camera bump is essentially the hardware assembly itself poking out.

In these images, the aluminum of the iPhone case itself is rising to meet the surface of that camera bump flush. This could be a measure to ‘waterproof’ the device as some have speculated Apple is working on. If it’s real, our dream of a flush camera on an iPhone larger than the 4-inch SE may be dead and gone.

And the antennae lines are now limited to the curvature of the case, and don’t seem to be scrolling across the rear of the device. Now you can talk about how gorgeous your new iPhone is while it’s ensconced in a case and really mean it.

The leaks come to us via Steve Hemmerstoffer of nowhereelse.fr, who also notes iPhone 7 production has begun in China. If accurate, there should be more leaks corroborating these cases, if they’re indeed from Apple’s supply chain partner(s).

Read next: Why Apple is (probably) really killing the Thunderbolt display