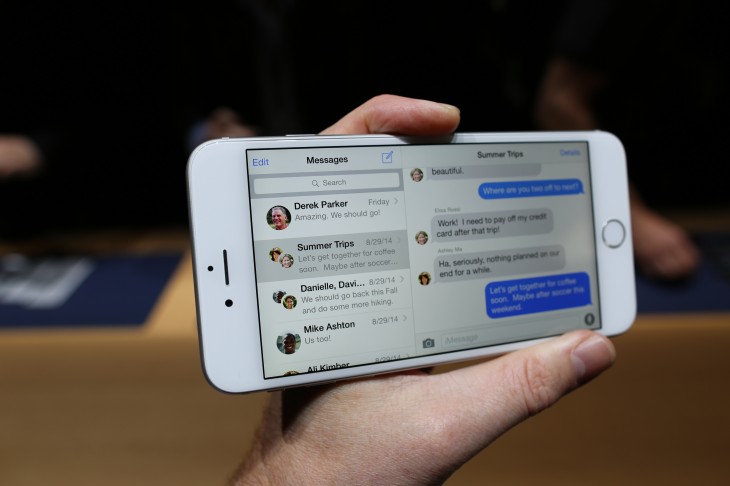 Apple has finally showed its hand. After months of (largely accurate) speculation, the Cupertino-based company unveiled its newest products on Tuesday: the iPhone 6, the larger iPhone 6 Plus, and the Apple Watch, its first foray into wearables.

Your take on the new devices will come down to a number of personal factors — Android fans will feel like they have reason to be snarky, as per below — but, overall, gadget geeks and the media who tested the hardware have been largely impressed. And that’s despite many frustrations with the livestream coverage of the event which was laden with technical glitches.

I couldn’t help myself, sorry. pic.twitter.com/NrwbqHMVL4

Apple’s Phil Schiller made a big point of highlighting that the new smartphones are available from just $199 (the iPhone 6) and $299 (the iPhone 6 plus) — but these are prices for the US and are subject to a typical two-year contract with an operator.

Outside of the US and other tier-one countries, in markets where carriers don’t subsidize devices, the price brackets will be very different. Given that Apple’s move to a larger device — the iPhone 6 is a phablet-tastic 5.5 inches — is based on the growing trend of larger phones that began in Asia, it’s somewhat ironic that it could cost consumers in Asia more than $1,000 to get their hands on the jumbo iPhone.

US pricing for the unlocked versions of the device is as follows — they serve as a rough guide to what consumers can expect although prices are typically marked up locally:

Yes, it is true that top-tier pricing is one element that makes the Apple brand aspirational and keeps the average ‘quality’ of user high — iOS users spend more on apps and services than people with Android phones, which helps attract developers — but this time around Apple has more competition than ever before. That’s thanks to a growing set of young companies who are producing smartphones that are primarily innovating around price point: offering quality experiences with previously unthinkable price tags.

Xiaomi is perhaps the most notable of the bunch.Its new Mi4 device will retail for around $300 when it goes on sale, and it offers a lower priced phone (the Redmi) which costs around $160 (for a 4G version) and is also available in a 5.5-inch phablet flavor. (See our review for more.)

OnePlus, another China-based manufacturer, produced a smartphone (which is also 5.5 inches) that my colleague Nick called “sublime.”OnePlus’ distribution is more limited than Xiaomi at this point, but at just $299, it is offering a real bargain.

Then there are (more) Chinese phones from the likes of Meizu, which produced the world’s first 128 GB smartphone. Its new MX4 also comes in above five inches, but with a svelte price range starting from $290 — though it is initially available in China only.

Aside from these upstarts, Samsung has its usual blitzkrieg of devices, which range from low-end to top-end price points and include the iPhone-like Galaxy Alpha. LG has followed suit with a range of mid-range iterations of its well-received G3 (which is yet another five-inch-plus phone) and HTC is releasing attractive mid-range phones for mid-range budgets, like the Desire 820.

Another notable mention is the new Moto family from Motorola, and specifically the $179 Moto G, which retains a premium flavor without a wallet-busting price tag.

But, at the end of the day, the Apple brand stands for premium, and few of the aforementioned low-price innovators have anything like mainstream brands. Apple’s business has never been based on mass adoption, but for the first time in a while, iOS fans in Asia and other emerging markets — like this author — can be forgiven for casting glances and deliberating other smartphones instead of those issued out of Cupertino.

“I think I’d rather get a Xiaomi” – heard this from half a dozen friends, all of whom are based in markets @xiaomi doesn’t yet serve yet

Nonetheless, there are plenty of Apple aficionados and affluent folks across Asia who we suspect will queue loyally and buy the new iPhones once they hit the market. But there has certainly never been so many quality devices available for more modest budgets, which is important as mobile is/will be the primary platform for internet access for millions across developing markets.

As for the Apple Watch: the market is still nascent (especially in Asia), and there are plenty of unknowns about the device, such as battery life — TNW’s Roberto Baldwin wasn’t able to access a working version of it at the launch event, for example. So let’s cross that bridge when we’re more informed.

Recap: Everything Apple announced at its September 2014 keynote