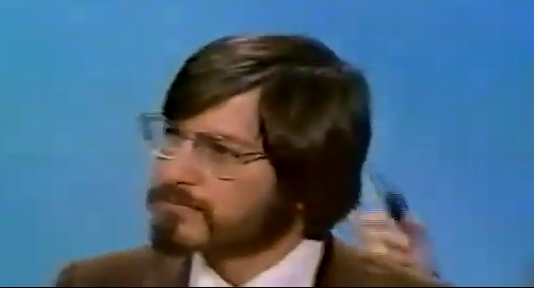 Earlier today, Apple’s Steve Jobs announced his resignation as CEO and his new position as Chairman of the Board, as well as his replacement by former COO Tim Cook. We’ve had a look at just who Tim Cook is, and the thoughts of Apple fans at WWDC about life after Jobs, but we thought we would take a minute to look back at some of the most unforgettable moments that we’ve had with Steve Jobs as CEO on video.

These are snippets of a life lived in the spotlight as one of the most successful and influential CEOs of all time. Now that Jobs has moved from his position and into the Chairmans seat, we’re sure that he will continue to appear publicly, but perhaps not as much as he used to. Let’s celebrate the moments that we had with CEO Steve and hope for many more with Chairman Steve.

We’ll kick off our list with this Stanford Graduation speech in which Jobs talks about his life, death and goals.

A younger, less seasoned Steve preparing for his first ever television interview

Steve introduces the iPad, arguably the culmination of the last decade of Apple’s product development.

Steve giving the keynote address in fall of 1983 where he shows, for the first and last time, the famous “1984” ad introducing the Macintosh.

This is a more recent clip, with Jobs and perennial rival Bill Gates on stage together at the D Conference.

Also from the D conference, Jobs can’t resist getting a dig in on Windows

Steve at Macworld Boston, just after returning to the company in 1997. This was a turning point for the company, nearly bankrupt, as it announced that it would be selling part of its stock to Microsoft in order to stay solvent.

Also from 1997, this is the keynote from that years Worldwide Developers Conference. This is pivotal because it turns out to have been the place where Jobs outlined plans for the company’s future products that are only becoming a reality now with iCloud.

In a rare failure for Jobs on stage, this is a clip from the iPhone 4’s announcement where he can’t quite get the device to work the way it should.

And finally, a great clip with Steve talking frankly about branding, Apple and ‘the crazy ones’

As a bonus video, here’s a great clip of Jobs and Pixar head John Lassiter talking about Steve’s other hugely successful company.

And one more by popular demand, Steve firing on all cylinders as he introduces the iPhone in 2007.

This is our top 20 most inspiring Steve Jobs quotes.

Read next: Steve Jobs resigns: It's the end of an era, but not the end of Apple