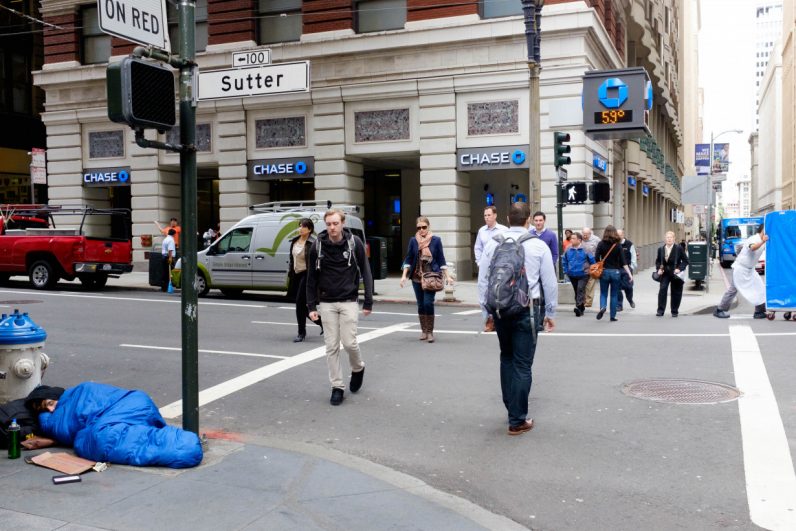 Homelessness in San Francisco is everywhere. In 2014, it was estimated that the city’s homeless population reached an astonishing 7,000 people. They live on the streets, nestled between the Golden City’s luxurious shopping malls and countless “unicorn” tech companies.

While there’s no sole cause for this humanitarian crisis, the finger of blame is inevitably pointed at San Francisco’s well-paid tech workers, who have driven the cost-of-living into the stratosphere. According to the Council for Community and Economic Research, the city has a cost-of-living that’s 62.6 percent higher than the average American city. This is particularly noticeable in housing costs, with the average rent for a two-bedroom apartment in San Francisco being $4,650.

The charity Rebuilding Together San Francisco says “yes.” While other homelessness charities focus on getting people off the streets, Rebuilding Together’s priority is ensuring they don’t fall into that position in the first place.

Nemsick told me that the most trivial of home maintenance problems can send people into a spiral that ultimately results in homelessness.

“Just basic things, like a leaky faucet that you can’t spend $2,000 on fixing, that then leaks into the structure of house, then causes dry rot, then causes structural issues,” said Nemsick.

Simple issues, if not fixed promptly, can result in properties being condemned by the city for code violations. And with San Francisco’s challenging housing market, finding somewhere new to stay is easier said than done.

Rebuilding Together’s focus is to ensure that properties remain livable for seniors and disabled people, who may struggle to afford fundamental household repairs. “We want people to stay in their homes for as long as possible. They don’t have to leave their homes because something is broken,” said Nemsick.

The non-profit works with 300 houses a year, and its work extends beyond repairs. It has, for example, installed a chair-lift for an individual who could no longer safely scale stairs. Rebuilding Together has also helped declutter several homes belonging to senior citizens, so they can safely move about their property.

This work is obviously extremely labor-intensive. Fortunately, some technology companies — most notably Salesforce — are willing to donate employee time and, crucially, money.

Working alongside Salesforce’s employees are a crack-team of specialists, who are able to tackle the more challenging aspects of home maintenance.

TNW reached out to Salesforce for comment on this piece. Unfortunately, they did not respond to our questions by the time of publication.

Rebuilding Together San Francisco works with a number of banks and tech firms in the city, but Nemsick notes that the number of tech firms that it collaborates with could be higher. That’s both surprising and dismaying, considering the vast human tragedy that plays out on San Francisco’s streets on a daily basis.

Fortunately, things are looking promising. The city just passed Proposition C, which will tax San Francisco’s biggest tech companies, with the funds used to provide homelessness services. A powerful voice advocating for Proposition C was Marc Benioff, who donated millions to the campaign for the bill, even though it would inevitably increase his company’s tax burden.

It’s estimated that Proposition C will raise an extra $300 million per year. This will be used to provide housing and hygiene facilities, as well as drug and mental health treatment services.

Other startups and tech companies are following in Benioff’s steps. Earlier this month, Airbnb’s CEO, Brian Chesky, announced that the company would donate $5 million over the next three years to address the homelessness crisis.

Airbnb is committing $5 million over the next three years to help address homelessness in San Francsico.

But for this flood of new money to be anything more than sticking plaster, it’s vital to address the root cause.

In 2015, it was reported that around 71 percent of San Francisco’s homeless population previously had housing in the city. And while economics, addiction, and mental illness can push people onto the streets, it’s worth recognizing that so too can a leaky faucet.

If you’re interested in supporting Rebuilding Together San Francisco, either with your time or your money, you can find out how on their website.