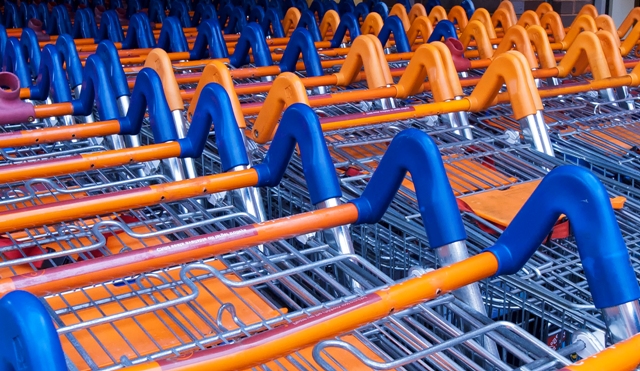 Hot on the heels of the reports that BA and United Airlines were dishing out iPads to their respective flight crews, UK supermarket chain Sainsbury’s has started kitting its trolleys out with docking stations for the Apple device.

As the Telegraph reports, Sainsbury’s is pimping up its rides and is rolling out a brand new breed of shopping cart, armed with its very own tilting iPad holder and speakers, meaning all shoppers need to do is slot their device in and they’re good to go.

In anticipation of distracted shoppers running amok, the trolleys will also be equipped with a front bumper and warning sensor which beeps if it gets too close to another trolley, whilst there’s also an on board battery powered by a solar panel to help ensure the iPad doesn’t run out of juice.

The trolleys were developed by broadcaster Sky to help promote its Sky Go service, which allows Sky TV customers to watch live sport on their mobile devices.

Ian Burgess of Setwo Designs, who created the trolleys, told the Telegraph:

“Being able to create a gadget that is practical yet innovative is often a challenge but I think with the trolley we’ve cracked it. The trolley can be used in the traditional way for shopping yet streams the latest sports news easily.”

We reported last year that the iPad is the fastest-selling gadget of all time, and there’s little question that it has taken off in a big way. But would shoppers be more inclined to shop at Sainsbury’s if they can dock their iPad? Surely combining watching TV whilst collecting the groceries isn’t an easy endeavor? And what about the speaker – does that mean we could soon be hearing a lot of noise emanating from shoppers’ trolleys?

What do you think – would you dock your iPad in a shopping trolley, or is this little more than a publicity stunt? Leave your comments below.

Read next: Samsung to invest $9.3 billion in R&D to help boost smartphone competitiveness