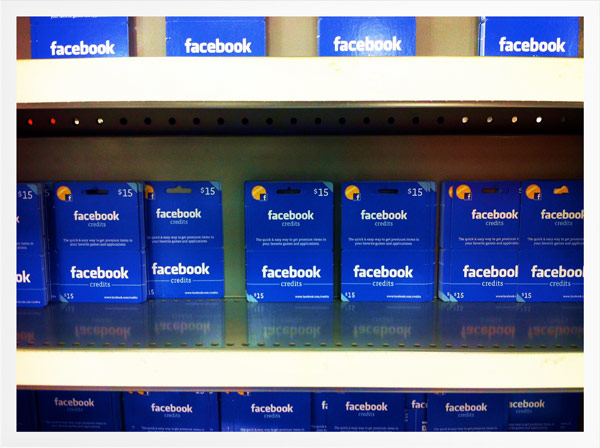 Facebook Credits are to be sold in retail stores in the UK as soon as this week, The Telegraph has revealed.

Facebook Credits are a form of virtual currency that allows users of the social network to purchase virtual gifts, games and buy unlockable items within Facebook applications, one of the most well-known examples being Farmville where users can purchase items to better outfit their virtual farms.

This week, Facebook users will be able to buy a Facebook Credit gift card from supermarket giant Tesco and the popular video game retailer Game, using them on the main Facebook website initially with the social network looking to enable purchases on third-party websites via its Facebook Connect service, which will allow visitors to register on external websites with only their Facebook ID.

In September, Facebook announced that it would be rolling out Facebook Credits to 1,750 Target stores in the US, in tiers of $15, $25, and $50. It was obvious that the company had the upcoming holiday sales season in mind, stating: “We think [the cards] will be incredibly popular as a holiday gift,” and they could be right with a holiday season UK launch.

Facebook’s Manager of Product Marketing Deborah Liu told The Telegraph that the new gift cards would “give parents peace of mind in what children were playing online, while also allowing children some freedom to spend their credits as they wished” and buy selling them at major retailers such as Tesco and Game, enable smaller developers to reach a large audience and a “wider reach into a new source of income”.

Read next: Guy becomes Foursquare mayor, gets free sandwiches for a year