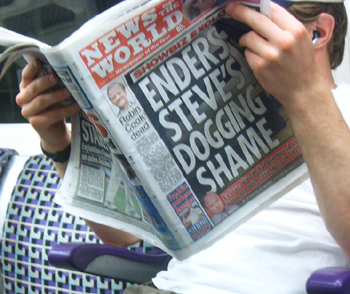 We knew it was coming, it was just a case of when. Now New Media Age is reporting that Rupert Murdoch’s next newspaper website paywall could well be in place by October.

UK tabloid newspapers The Sun and News of the World will follow their more upmarket counterparts the Times and Sunday Times by going behind a paywall in October. According to the report (ironically behind a paywall itself, although republished here), the paywall will hinge on “Exclusive video content, distributed across an overhauled site and app.”

As with the Times and Sunday Times, there would be a discounted introductory period and a marketing campaign to support the launch.

The question is, can it work? The Times and Sunday Times seem to have had a shaky start to their paywall and with The Sun and News of the World concentrating on celebrity news and ‘real life’ stories, they could have an even harder time simply because there are so many sites offering that type of content for free. Notably, rival newspaper site Mail Online is making a success story of not charging users and relying on ads.

If New Media Age’s report, based on unnamed sources, is correct it will be exclusive videos that will drive people to the website. “See our exclusive video on this story by buying a day pass for the website”, we can imagine future paper editions Sun/News of the World saying. The problem for Murdoch will be getting enough exclusive content that these newspapers’ generally downmarket audience will be willing to pay for – in a tough economic climate.

So, is Murdoch a crazy old man committing corporate suicide by insisting on charging for websites as newspaper sales plummet? Possibly, but there’s an alternative theory. Maybe it’s actually a smart delaying tactic.

Maybe Murdoch knows that mass-market paywalled content won’t work in the long term and he’s simply trying to milk every last penny from his newspaper properties while he can before he finally pulls the plug when they become unsustainable. After all, even if just a handful of people switch from reading the website for free to paying for it, it will be more than are paying right now.

Whatever Murdoch’s real thinking, we’re standing by the “Newspaper websites should operate more like blogs” theory, at least until Murdoch or someone else proves us wrong.

Read next: Google bringing a Chrome OS tablet to market, just in time for the holidays.