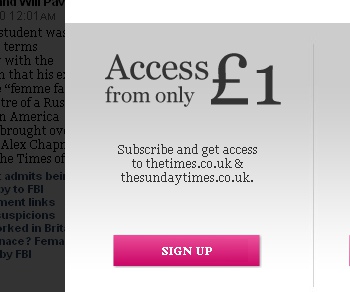 UK newspaper websites The Times and Sunday Times have this morning completed their transition to being paid-for services.

From mid-June, users were asked to register free to read articles at the websites but now it’s a case of pay up or move on. Visit TheTimes.co.uk, for example, and you’ll see what looks like the normal website. Try to click on a story, though and you’re presented with this:

Get me in
Readers currently have the choice of £1 per day for access to the site, or a promotional rate of £1 for 30 days’ access. Users who take this promotional rate will be bumped onto a £2 per week subscription once the trial period is over. Those who subscribe to the tradition newspaper version  of The Times get access to the site included in their current subscription.

As we recently reported, figures show traffic to The Times has almost halved since requiring registration to read stories began. We imagine that the drop will continue but as long as the number of users wiling to pay is high enough to turn a profit, owner Rupert Murdoch won’t be complaining.

Next to disappear behind a paywall will be Murdoch’s UK tabloid titles The Sun and News of the World. Given their more downmarket nature, charging for access to the website might be a harder sell.