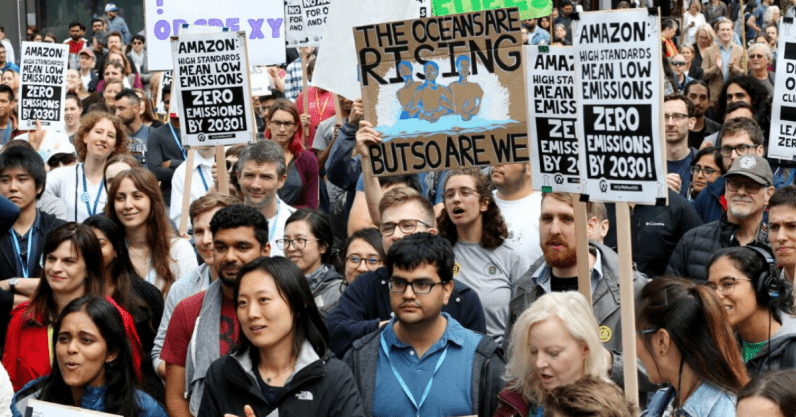 In May last year, Amazon employees publicly pressured their employer to take action and responsibility for their contribution to the climate crisis in a rally outside of its stakeholders meeting. Since then, the company warned two workers that they could face termination if they continue to violate Amazon’s “external communications policy.”

In a Medium post published by “Amazon Employees for Climate Justice” on Sunday, more than 350 workers put their jobs on the line as they criticized Amazon’s contribution to the climate crisis under their name and job title. By doing this, they’re violating the company’s PR rules that prevents employees from discussing company business without approval.

In the post, one Amazon employee wrote: “The science on climate change is clear. It is unconscionable for Amazon to continue helping the oil and gas industry extract fossil fuels while trying to silence employees who speak out.” The large majority of these posts criticized the company for its role in the oil industry, while others called Amazon “dangerous” for silencing the words of employees “who are looking for the welfare of everyone.”

Amazon’s workers are speaking out to say: Jeff Bezos should not be in the business of fossil fuel extraction.

The company’s response? Retaliate with threats of firing.

I stand with these employees who are fighting to protect the only home we have. pic.twitter.com/bvgsEH7nHj

The “Amazon Employees for Climate Justice” group wants the tech giant to follow through with its sustainability goals, reach carbon neutrality by 2030, and put a definite end to cloud computing contracts with fossil fuel companies.

“As Amazon workers, we are responsible for not only the success of the company, but its impact as well,” Sarah Tracy, a software engineer at Amazon said in one of the statements. “It’s our moral responsibility to speak up, and the changes to the communications policy are censoring us from exercising that responsibility. Now is not the time to silence employees, especially when the climate crisis poses such an unprecedented threat to humanity.”

Currently, 357 Amazon employees have published a public statement about Amazon’s role in the climate crisis, and organizers believe they’re “stronger in numbers.” In a statement sent to GeekWire, an Amazon spokesperson said: “While all employees are welcome to engage constructively with any of the many teams inside Amazon that work on sustainability and other topics, we do enforce our external communications policy, and will not allow employees to publicly disparage or misrepresent the company or the hard work of their colleagues who are developing solutions to these hard problems.”

This is the latest example of what could be the biggest threat to tech giants: employee activist groups. It’s a trend that’s been spreading among over corporate companies including Google. Last year, thousands of employees participated in a company “Walkout” over claims of harassment and inequality within the workplace.

For now, it’s unclear if Amazon will choose to punish — and potentially fire — each employee who published a statement.