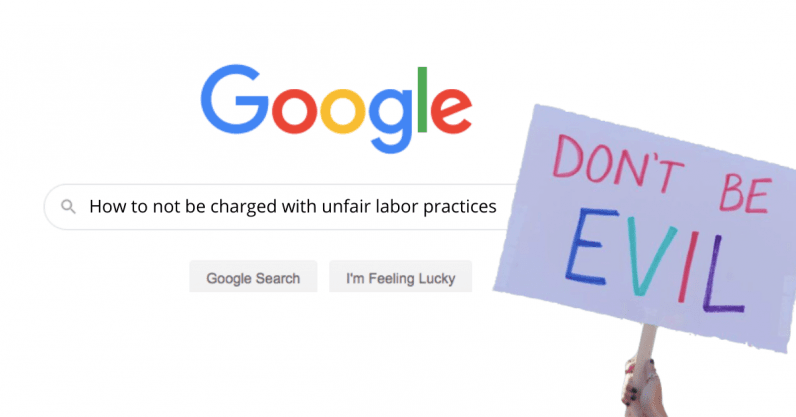 Over the past month, Google has found itself in yet another problematic situation with its employees. It started when some employees of the tech giant protested outside its HQ offices in San Francisco over the suspension of two activist employees, Rebecca Rivers and Laurence Berland, who were put on leave for — what some employees are arguing — speaking out against the company.

Since then, Google fired both employees, as well as two others involved in the initial protest. But now, those fired former-Googlers plan to file labor charges against the tech giant, accusing the company of letting them go for engaging in protected labor organizing.

In an open letter published yesterday by “Google Walkout For Real Change,” on Medium, the article outlined how the four employees, Laurence Berland, Paul Duke, Rebecca Rivers, and Sophie Waldman, who were all involved in internal activism at the company, will “fight back.”

The four argue that they weren’t fired for violating the company’s data-security policies, like Google claimed. “It’s about trying to stop all workplace organizing,” the open letter stated. “Google wants to send a message to everyone: if you dare to engage in protected labor organizing, you will be punished.”

As a first step, the Unfair Labor Practice charges will be filed with the National Labor Relations Board, the government agency tasked with enforcing US labor law, as outlined by the former-employees. Under the board’s process, officials will investigate the charges and ultimately decide whether they need to take further action.

Since this all began, Google has adamantly said that Rivers and Berland were fired for  “violating its data-security policies,” including unrightfully accessed employee’s calendars containing information of their location and shared it with external sources.

“The company is claiming that for looking up calendars and documents, which is something we all do, but we know that it is punishment for speaking up for themselves and others,” Google employees wrote in a press release last month. However, Google maintains its original position.

“We dismissed four individuals who were engaged in intentional and often repeated violations of our longstanding data security policies, including systematically accessing and disseminating other employees’ materials and work,” a Google spokesperson told The Guardian. “No one has been dismissed for raising concerns or debating the company’s activities.”

These firings are part of a bigger, ongoing issue between Google and its employees. Over the past two years, Googlers have been protesting and organizing over issues including its handling of how management deals with sexual assault and harassment accusations, its controversial work for the military, and the treatment of its LGBTQ+ content creators on YouTube, Google’s subsidiary company.

Amidst the internal criticism at Google, the tech giant hired an anti-union consultant law firm to advise management on how to handle internal retaliation. It seems that tensions will remain high at the tech company, and odds are this will have lasting effects on the company’s reputation.