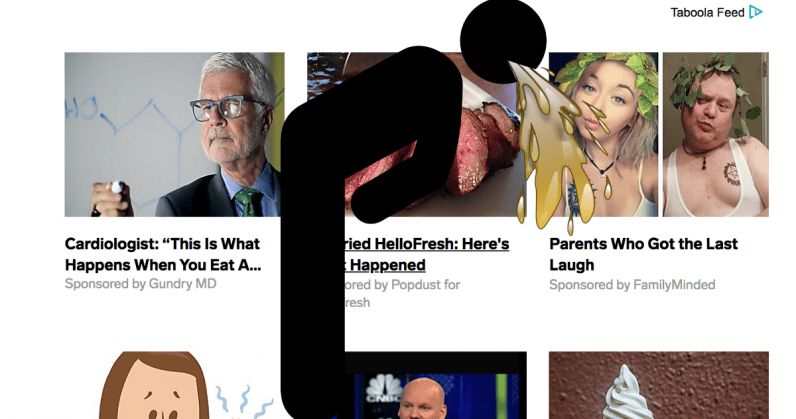 Taboola and Outbrain are perhaps the two most controversial startups hardly anyone knows about. And now, according to an article in Israeli business publication The Marker, they’re merging into one advertising super-conglomerate.

Rumors of a merger between the two companies have circulated since 2017. According to The Marker, shareholders in Outbrain will receive $250 million, plus 30 percent of the shares in the new venture.

Even if you’re unfamiliar with their names, you’re undoubtedly aware of their work.

You know when you scroll to the bottom of an article and get “recommended” low-quality clickbait content about teeth whitening products, or salacious gossip about a former child actor with well-established mental health issues? Yeah, that’s them.

There’s even a super-appropriate moniker for these “recommendations.” Critics call them the “chumbox,” after chum: a blend of fish slurry used by fishermen to bait other fish. It’s appropriate, don’t you think?

The two firms have some striking similarities. Both startups have Israeli founders. They typically work with sites with a high traffic turnover. Their products are strikingly similar. And they’re both ludicrously profitable, with Taboola’s 2018 profits reaching $50 million on revenues of $1 billion.

And, I’d argue, Outbrain and Taboola are both fundamentally evil.

They’re making us dumber and meaner. Both startups make money from spoon-feeding millions a diet of clickbait and dross. And far too much of the content they “recommend” is at the expense of other people. And I’m not just talking about celebrities. A great example of this is author Matt Logelin.

After Logelin’s wife died in tragic circumstances, several content mills repackaged his story into hyper-monetized nuggets of content, which was pushed across the Taboola network. As Logelin traversed the internet, he was constantly being confronted with his most painful moment.

Here’s what Logelin told Alex Goldman, host of the Reply All podcast:

So the one that I saw this morning on an ad on Page Six as I clicked through some shitty, like, entertainment article was: “Wife Dies and the Next Day Husband Clicks Through to Her Pregnancy Blog and dot dot dot” — it’s that kind of thing. Or “The Day After Wife Dies Husband Finds Her Secret.” Or something kind of crazy like that, which none of that was true.

What happened to Logelin was obviously wrong. His tragedy was distorted and hijacked by content farms for clicks. Any company with a decent moral center would have refused to run those adverts. But Taboola only folded after the host of a wildly popular podcast championed his cause.

In conclusion, congrats on the merger Taboola and Outbrain, but I still think you’re scum, and I can’t wait for the day you fold. It’ll be a monumental event in the history of our species, up there with the fall of the Berlin Wall and the invention of the wheel.

Read next: CHEAP: Forget about the cloud, get this 2TB Hitachi drive for $30