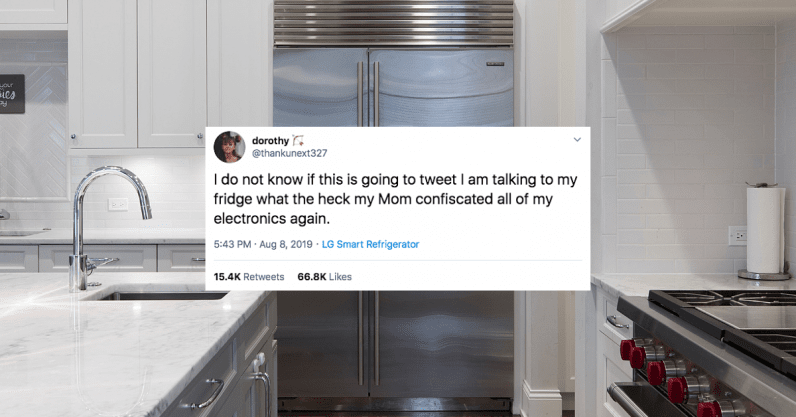 You hear the word “innovation” a lot in tech, and half the time, it’s never really that impressive or even innovative. But last week, for the first time, I was bewildered by the tech that is a LG Smart Refrigerator and the innovation of one Ariana Grande twitter fan account, @thankunext327. For today’s teens, having your mom confiscate all your tech must feel close to the end of the world. While some kids would simply look for their confiscated phone in their parents’ bedroom or their mom’s bag, this resourceful teen did what any future genius would do — tweet from her family’s smart fridge.

I do not know if this is going to tweet I am talking to my fridge what the heck my Mom confiscated all of my electronics again.

The 15-year-old in question, going by the name of “Dorothy” on Twitter, had her phone taken away from her after she got distracted while cooking and lit her house on fire, according to The Guardian. But she managed to find other ways to keep her followers updated, including tweeting from her Nintendo 3DS game console claiming she’s leaving forever.

Because moms know what their kid is going to do before they even do it, she confiscated the Nintendo and let her daughter’s followers know the account “will be shut down now.”

I seen that Dorothy has been using twitter on her Nintendo. This account will be shut down now. pic.twitter.com/L4JqNYhUHe

It didn’t stop there. Dorothy went on to use her Wii U to post a heartfelt message to her followers, thanking them for their continued support and love during these trying times.

There was simply no stopping Dorothy:

hey guys omg. my mom is at work so i’m looking for my phone. wish me luck. lov u #Mii #MiiMaker #WiiU pic.twitter.com/BaaAWUUjoV

By this time, #FreeDorothy was trending on Twitter, and after just over an hour of searching for her confiscated tech devices, Dorothy found her DS… which her mom then took away again — leading her to tweet from the refrigerator:

I do not know if this is going to tweet I am talking to my fridge what the heck my Mom confiscated all of my electronics again.

She has continued to tweet from the fridge, thanking her thousands of followers for the support.

I don’t know how I got this much support thank you so much to my supporters and @twitter this is crazy I would be lost without you and given up. I’m trying to get my things back fast so I can thank you properly!

Dorothy’s resilience and ingenuity gives me hope for the future. The kids are alright.

After this article was published, BuzzFeed wrote an article about this story possibly being fake, on the grounds that none of LG’s smart fridges have the Twitter app installed. We’ll update the story as we learn more.

Read next: Coinbase and Barclays split up – but the cryptocurrency exchange already has a new banking bae