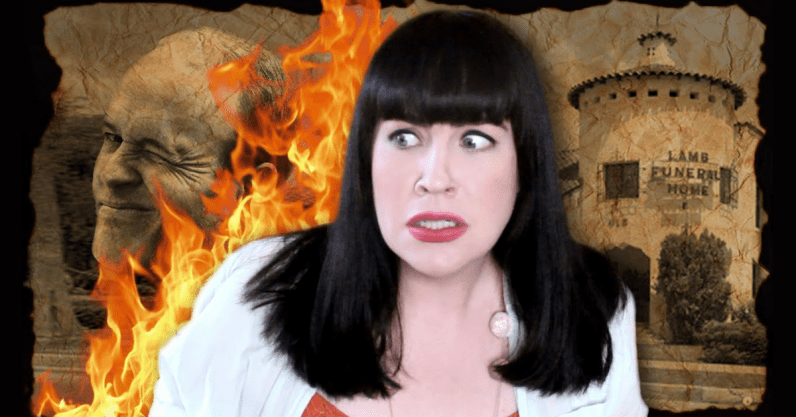 Growing up, I watched Disney movies on repeat where a mermaid gave up her voice for a man and was taught I should be a damsel in distress until my Prince Charming rescued me. But I was sheltered from movies like Bambi and Lion King where, for once, the evil character didn’t die, the loved parent did.

After hours of therapy (alone at night thinking about death and staring into the pit of darkness that is my soul), I self-diagnosed my borderline unhealthy obsession with death to have occurred because I was never exposed to death.

Death is something we as a society don’t care to think or talk about — unless, like me, you stay up at night pondering about the inevitability of the inevitable. It’s not a case of “if” you die, it’s “when” you’ll die, and that’s a hard pill to swallow. But Caitlin Doughty, a LA-based Mortician and YouTube host of the channel, Ask A Mortician, answers all of our inquisitive and creepy questions about death — from what happens to breast implants in a crematory machine to what happens to a fetus if a woman dies when pregnant — everything that my young death-starved self needs and wants to know.

“I created Ask A Mortician because there was a need for honest conversation about death. There’s still a need, seven years later! And I wish there were 10 other channels like mine,” Doughty told TNW.

After questioning her own family’s incapability of talking about death, Doughty strives to spark conversations about death while myth-busting the incorrect and often damaging reputation death and dying holds. In most cases, the truth about death isn’t half as scary as what we’re led to believe.

For example, when your mom dies (sorry), the funeral director might tell you she’s being embalmed ‘for sanitation and preservation.’ Ok, but what does that really mean? That’s exactly what Doughty wants to share with her viewers, even though the details might seem grim.

“It means that her blood is drained and replaced with chemicals. It means that spiked caps are placed under her eyelids to close them,” Doughty explains. “Conventional wisdom tells us that we shouldn’t really let families know what’s happening with their dead behind the scenes because it’s too ghastly, too difficult. But that kind of mystery, hiding the truth, is where death anxiety and fear come from.”

But Doughty’s YouTube channel, which boasts almost 800,000 subscribers (people Doughty refers to as “Deathlings”), is just a small fraction of her work in raising awareness for the death positive movement. This includes: founding a death acceptance organization, The Order of the Good Death, writing three books on the topic, and opening Undertaking LA four years ago, a non-profit alternative funeral home.

Ask A Mortician answers the questions we’re all to scared to ask: Would my cat or dog eat my corpse? What happened to the Titanic’s dead? How do you close a dead person’s mouth? What are my funeral options if I die fat? Doughty even interviews a mortician makeup artist on how to do flawless funeral makeup, for your big day.

Doughty nonchalantly delves into each topic, be that gruesome or creepy because death is inevitable after all.

“The response to Ask A Mortician has been almost universally positive,” Doughty said. “People expect my channel to be controversial and YouTube demonetizes my videos because they assume the content is controversial. But what is controversial about basic facts? What happens to a body during a cremation, embalming, or decomposition, that’s not some fun time for goth kids show, this is important, weighty, existential knowledge that every human should have.”

Think you’re ready to accept your fate? You can find Doughty’s channel here and I’d suggest the video on closing dead people’s eyes to get you started — it’s an easy watch.

Read next: Everything you ever wanted to know about the Apple Card