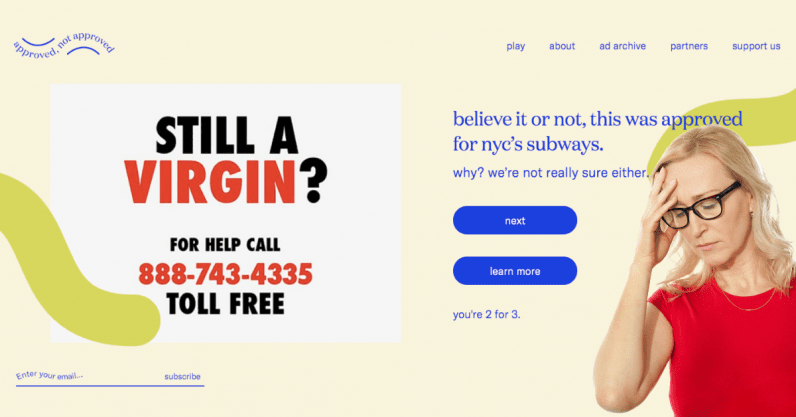 Last month, Dame, a female-founded sex toy company, announced it was suing the MTA (Metropolitan Transportation Authority) for censoring its campaign on NYC’s subway. On the subway today, you’ll probably spot a few ads promoting medication for erectile dysfunction and low male libidos from companies like Hims and Roman, but you won’t see sexual wellness ads targeted towards women.

There’s a blatant double standard when it comes to sexual wellness products for women and men — and it’s not just on the subway. Both Facebook and Instagram are making it harder for companies like Dame to promote their products with their advertising policies.

In response, Dame and Unbound, a sexual wellness company that has also faced censorship, are working together to tackle these double standards. Together, they have arranged a protest today outside Facebook’s NYC headquarters to raise awareness of its policies that favor male sexual wellness products rather than women’s.

The sextech companies also launched a website, “Approved, Not Approved,” which demonstrates how ads for sex toys and products geared towards men are more likely to be approved than those for women, trans, or non-binary people.

Once you land on the site, you’re asked to play a fun little game of  “Approved, Not Approved” where you simply decide if the ad presented was approved or not by advertising giants.

In this game of double standards, an advert by “Hims,” a company selling erectile dysfunction meds, shows a shirtless man which Facebook allowed on its platform. However, an ad for “O.school,” a sex education site, shows a fully-clothed woman in bed and was disapproved by Facebook for its “sexual nature.”

“I was treated so poorly by the MTA and they wouldn’t even tell us how they made the distinction,” Alex Fine, co-founder of Dame told TNW. “The most shocking thing to people is when I show them a ‘Hims’ ad, an approved campaign for erectile dysfunction, compared to ours, they don’t see the difference.”

And it’s not just companies selling sex products geared towards women. Nick Boyajian, the COO of Wild Flower, a company designing non-binary sex toys, faces varying degrees of difficulty when it comes to advertising on the social media giants.

“Waves of our content has been taken down — typically images of people of color and other marginalized folks.” Boyajian told TNW. “To find us, you have to type our entire name into the search bar (and even then we’ll be low down in the results), and we almost never show up on Instagram’s ‘explore’ section.”

The censorship restrictions imposed by advertising giants, such as the MTA, represents yet another hurdle that women and non-binary centric tech companies like Dame, Unbound, and Wild Flower have to face.