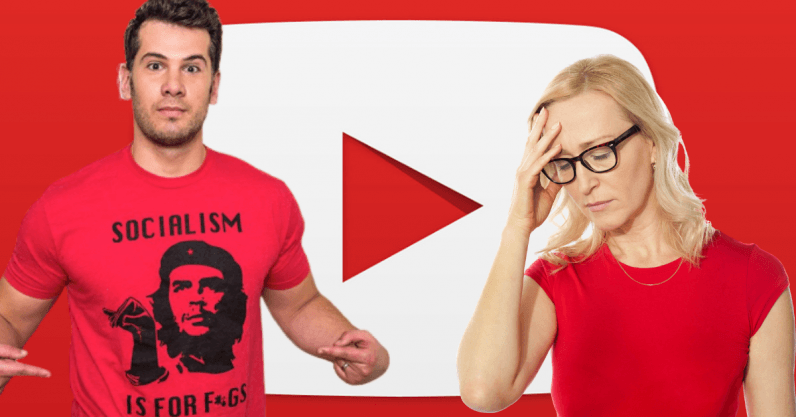 Besides changing its logo to feature a rainbow of colors, YouTube is hardly celebrating Pride Month the right way this June, as it’s failed to address a key concern for LGBTQ users in its community.

At the end of May, Vox host Carlos Maza tweeted a thread exposing several instances where right-wing YouTube commentator Steven Crowder clearly made homophobic and racist comments about him on his YouTube video series, Strikethrough.

Since I started working at Vox, Steven Crowder has been making video after video “debunking” Strikethrough. Every single video has included repeated, overt attacks on my sexual orientation and ethnicity. Here’s a sample: pic.twitter.com/UReCcQ2Elj

In response to this, Youtube conducted an investigation, and a week later, the video-sharing platform said Crowder did not violate any of its policies. Therefore his channel, which has almost 4 million subscribers, will remain on YouTube — despite his repeated homophobic slurs broadcasted on the platform.

YouTube’s response was posted in a series of tweets to Maza explaining how they had taken a closer look into his complaints and ultimately decided that while some of the language used in Crowder’s videos was “clearly hurtful,” it did not violate the platform’s policies.

YouTube, like any private company, has its own policies for dealing with hate speech. It holds the rights to suspend or ban any account that violates its policies. Contradictory to YouTube’s series of tweets, its “Harassment and cyberbullying policy” page outlines that “content that makes hurtful and negative personal comments/videos about another person” is forbidden on the social networking site.

It depends on what the policy on policies is, apparentlyhttps://t.co/Qw71pyKBid pic.twitter.com/xvmYVDmBfg

To put it plainly, it seems that YouTube doesn’t consider Crowder’s comments to Maza hurtful enough to remove the content. Across several videos, which collectively have millions of views, Crowder has called Maza a “lispy queer,” a “token Vox gay atheist sprit,” and a “gay Mexican” over a two year span.

Because of Crowder’s targeted harassment, Maza has faced a “wall of homophoic/racist abuse on Instagram and Twitter,” as well as texts to his private number and even a phone call. Crowder rakes in almost 27 million monthly views and his channel is infamous for abusing people he doesn’t like online — and YouTube should stop turning a blind eye and enforce its rules appropriately.

Last year, I got doxxed, and it scared the fuck out of me. My phone was bombarded with hundreds of texts at the exact same time. The messages? pic.twitter.com/ls4qBM9k08

The YouTube support team went on to say: “As an open platform, it’s crucial for us to allow everyone — from creators to journalists to late-night TV hoses — to express their opinion w/in the scope of our policies. Opinions can be deeply offensive, but if they don’t violate our policies, they’ll remain on our site.”

(2/4) Our teams spent the last few days conducting an in-depth review of the videos flagged to us, and while we found language that was clearly hurtful, the videos as posted don’t violate our policies. We’ve included more info below to explain this decision:

Gizmodo reported that YouTube didn’t punish Crowder because he was “focused primarily on debating.” So taking this into account, the platform believes it’s perfectly fine for a host with millions of subscribers to repeatedly direct homophobic and racist comments towards Maza as long it’s considered as “debating” — this is yet just another example of the inherent misunderstanding of regulating hate speech online.

Good lord. @YouTube says it didn’t punish Crowder because he was “focused primarily on debating” when he repeatedly called me a “lispy queer.”

You can harass queer people as much as you want as long as its sandwiched between “debating.”

In YouTube’s final follow up tweet, it went on to clarify that “even if a video remains on our site, it doesn’t mean we endorse/support that viewpoint.”

Crowder defended his homophobic and racists remarks as jokes referring to them as “harmless ribbing” in an obviously insincere apology response video earlier this week titled, “I’m Sorry.” On his website, Crowder sells a t-shirt, which is also featured on his Twitter header, which has a homophobic slur with one letter removed.

In response to YouTube’s series of tweets, Maza wrote shortly after: “I don’t know what to say” after two years of Crowder harassing him for being gay and Latino. Maza continues his utter disbelief with: “To be crystal clear: YouTube has decided that targeted racist and homophobic harassment does not violate its policies against hate speech of harassment. That’s an absolutely batshit policy that gives bigots free license.”

I don’t know what to say.
@YouTube has decided not to punish Crowder, after he spent two years harassing me for being gay and Latino.

I don’t know what to say. https://t.co/EFvWCNvPms

Maza continued to expose YouTube’s clear hypocrisy in regards to the platform changing its Twitter avatar photos to ones showing the rainbow flag for LGBT Pride Month.

I don’t know what else LGBT people are supposed to do. I compiled the clips for them. I sent them everything. Publicly begged them to pay attention.

It’s never enough. Because @YouTube does not give a fuck about protecting marginalized people, and it never has.

As YouTube firmly took a stand on how it deals — or in fact, how it doesn’t deal with hate speech on its platform — it allows the worst of its communities to hide behind their screens and the safety blanket of “free speech.” All while punishing marginalized communities who, because of YouTube’s failure to recognize hate speech, receive unthinkable harassment — just going to show how YouTube’s only priority is money, and not the safety of its creators.

YouTube initially responded that Crowder’s language did not violate its Community Guidelines, although it acknowledged it was “clearly hurtful.” Later, the social platform tried to unsuccessfully curb the backlash by removing ads from Crowder’s videos — a process known as demonetization.

Read next: It sure looks like Apple is gearing up for more cryptocurrency apps