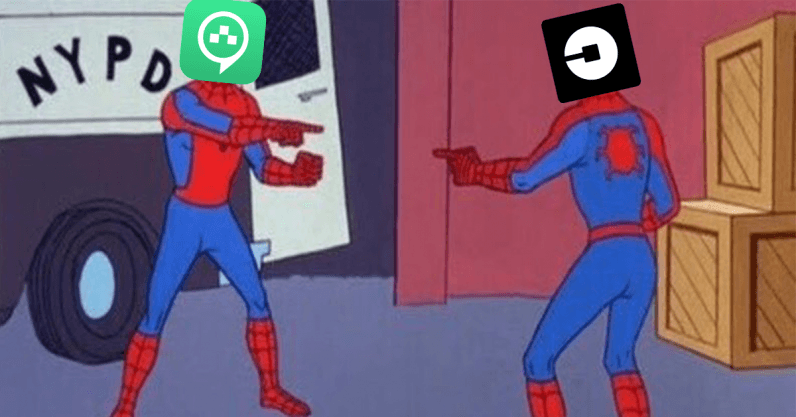 Bolt, previously known as Taxify, is a ride-sharing app and one of Estonia‘s four unicorns (AKA startups valued at over $1 billion). On a visit to Talinn, TNW met with Martin Villig, the company’s co-founder, to hear about Bolt’s plans to become the de facto transport app in the world.

The problem? Its plans for domination seem to revolve around copying Uber.

But first, some background. Bolt is a genuinely interesting and successful company. When the business was founded in 2013, the taxi market in many Eastern European countries was, well, deeply untrustworthy. Bolt has improved this massively; you can now get a reliable vehicle, easily.

In the past three years in particularly its growth has been stratospheric; from 3 million riders to 25 million, from 11 countries of operation to 30. It’s notably successful in the aforementioned Eastern Europe and parts of Africa, specifically, South Africa, Kenya, Tanzania, and Nigeria. For all intents and purposes it’s flourishing.

I feel there’s a “but” coming…

Yup. Villig stated that Bolt wants to become bigger than Uber, but they don’t seem to have new ideas on how to do this. During the talk, he pointed the things Bolt is currently working on (and rolling out) to grow the company:

You’re not going to beat Uber by basically being it.

To provide some balance, Bolt isn’t exactly like its biggest competitor. One element that Villig pointed to that separates the pair is profit distribution. While Uber charges around 25 percent of a fare, Bolt only takes a 15 percent cut. Which, considering Uber’s drivers are treated like shit, is a good point of differentiation.

Okay, is copying a successful business really that bad though?

Purists would like to say that copying is terrible, but it’s part of every aspect of human life. Without copying original ideas, nothing would ever become perfect. Fundamentally, there’s nothing wrong with looking at Uber‘s success and trying to refine it.

Apart from the fact Uber‘s business model is trash.

If you have a moment, I’d suggest checking out this analysis of Uber’s prospectus for its IPO from Jacobin. It’s sobering read. In summary, it points out that Uber is haemorrhaging money and is overvalued. The “presumed price” of an Uber share “is around $100,” but the prospectus itself claims the company’s value is actually “$(7,620) million or $(0.02) per share.” Oh, and even worse? It literally says “[Uber] may not be able to achieve or maintain profitability in the near term or at all.”

The business model Bolt’s copying is, to be polite, deeply flawed. When I put this to Villig, his answer wasn’t satisfactory. He spoke a lot about Bolt’s potential in the market, and how its fundamental business is different from Uber‘s. He then went onto say Bolt could become profitable again, with only a simple pivot needed.

To support Villig’s argument, the presentation Bolt gave us included a range of figures backing up these claims. For example, transportation is the second biggest household expense (behind the housing, utilities, and fuels category) and is a $12 trillion market, so there’s a lot of money to be made in the space.

The same presentation went onto say that while on-demand rides only make up 4 percent of journeys now, this will rise to 28 percent in 2028. One of the main drivers for this shift will be people getting rid of their polluting vehicles and choosing the simpler option of ride sharing. Again, potential.

And do you believe this?

I have no doubt that ridesharing might be more popular in 2028, but I doubt it’s going to be this drastic.

Is Bolt doomed then?

No, far from it. When I used the service in Estonia it worked well, and the drivers seemed happy – it was a slick, Uber-esque experience. There’s also some exciting potential there.

The fact Bolt has such a stronghold in Eastern Europe and parts of Africa is a huge point of differentiation, and I’d love to see the company come up with exciting ideas to capitalize on this, not just copying Uber‘s questionable business model. If Bolt wants to beat its biggest competitor, it needs to do more than just copy it.

Ultimately, Bolt is a good business with a lot of room to grow. I’d just like to see it forging its own path, rather than following another’s.

Read next: How our interactions with voice assistants normalize sexual harassment