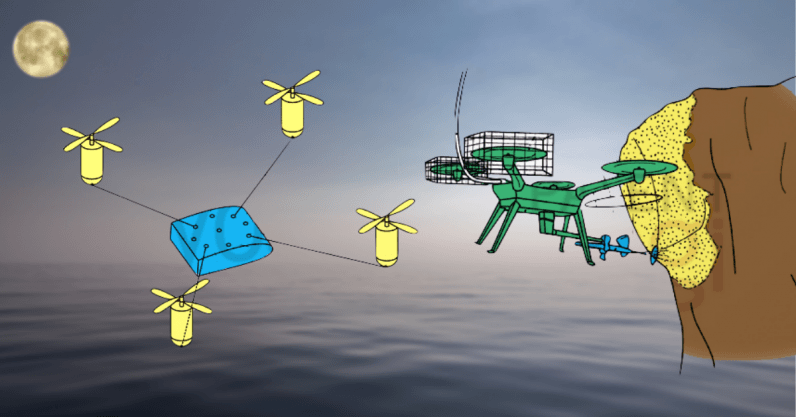 Ugh, the Gregorian calendar is so boring. That’s why we’re disrupting monthly series with a lunar cycle-based series about the best patents of the last synodic month, picked by the PatentYogi team. Get ready when that moon gets gibbous, y’all. This May-ish roundup lands on the beautiful Flower Moon!

Since my last post, the US patent office issued over 29,948 patents and published over 33,636 patent applications. Each patent asset adds a little something new to the human knowledge base. As I cannot list all these patent assets here, my team and I have selected the five most interesting patent assets. Enjoy!

Disney has invented a drone-based painting system termed as paintcopter. A recent patent publication from Disney disclosed details of this unique system.

The paintcopter (as shown in the figure above) has a support arm, with a paint nozzle at one end. The rotors of the paintcopter are covered by enclosures to protect the paint supply lines during operation.

Social media has become a significant part of our lives. However, our social media feeds often become cluttered with posts from too many sources.  Facebook has come up with a vital solution to this problem.

According to a recent patent publication, Facebook plans to introduce a new secret mode that will enable a secondary (or a “secret”) feed for you, in addition to your regular feed. In the secret feed, you will be able to see posts from a limited number of chosen friends. You can choose friends whose posts you want to see in your secret feed.

The look and feel of the secret mode will be a simplified version of the regular feed, as shown in the figure above. You could also choose a different username for the secret mode. Privacy settings of the secret mode can be altered so that only you can view the interactions (reactions, shares, and comments) on your posts.

Although a simple addition, this feature will provide a more personalized experience for the users of Facebook. My Facebook feed is full of useless information so I will look forward to the launch of this feature.

Drones are being used everywhere nowadays. However, most available drones can only be used for limited applications. For example, the delivery drones are limited in the amount and type of payloads that they can carry. Amazon has come up with a unique solution to this problem.

A recent patent publication from Amazon describes a distributed and reconfigurable drone system. As shown in the figure above, multiple drones will fly in perfect synchronization with each other to lift a payload. The controllers of the drones communicate with each other during the flight to maintain formation. The number and orientation of drones can be changed as required. For example, if the payload is heavier, more drones will be a part of the drone configuration.

The drones will be connected to the payload through tethers. The tethers themselves may be made up of different types of materials ranging from fibers to plastics and even metals depending on the type of payload.

The drone configuration could also change mid-flight while performing a task, if required. For example, the altitude of the drones can increase with respect to the payload to increase the pulling force.

Amazon has been actively innovating with drone technology like allowing drones to obtain depth information with a single camera, and reducing the noise produced by the drones. This invention looks like another step towards automating deliveries using drones.

The technology to refuel airplanes mid-air has existed for many decades. But this technology hasn’t been used for automobiles. If a recently published patent application is to be believed, Ford cars will soon have the capability to be “refueled” (or recharged) on the go.

As shown in the figure, the mobile charge vehicle includes a recharging arm which can be extended and maneuvered to make contact with the charging interface and supply power to your vehicle. The recharging arm also has a spring mechanism to maintain the connection with your vehicle even if the road is bumpy.

It remains to be seen how soon Ford rolls out these mobile charge vehicles.

A recently published patent application from Uber describes a sensor assembly for self-driving trailer trucks. As shown in the figure above, the sensors will be placed around Uber trailers. The sensor assembly will include sensors like LIDAR, a number of cameras, a radar system, proximity sensors, infrared sensors, sonar sensors, and the like. These sensors will capture an all-around view of the surroundings of the truck, and allow a control system to autonomously control and drive the trucks. The sensors will be located in place of brake lights, parking lights, and indicator lamps to comply with the regulations.

However, the National Highway Traffic Safety Administration (NHTSA) has a stringent set of regulations for cargo trucks, and trailer trucks, requiring multiple light indicators. So, the sensors will also include lighting elements that comply with these regulations.

This technology will revolutionize the logistics industry for the better, as there will be no more tired drivers, no more stoppages, lower downtime, and faster shipping. Win-win for all!

Look out for the latest lunar cycle-based patent update every full moon. Next up is the tasty Strawberry Moon in mid-June. See you then!

Read next: CHEAP: Spy on your sneaky infant with 34% off the Arlo Baby Monitor