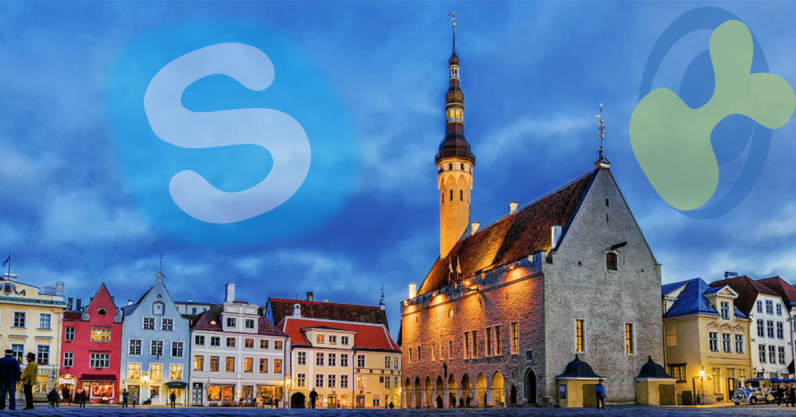 While Skype is now a Microsoft-owned behemoth, its early days were very different. Skype‘s heritage goes back to KaZaa, a P2P (peer-to-peer) file-sharing application that was one of the pillars of the early internet.

And while the spirit of those times petered in Skype itself, the country of its origin, Estonia, has fulfilled the promise of P2P.

First, some context. We met Tanel Erm – the Managing Director of Microsoft’s Estonia dev center – in Talinn, who gave us some insight into the early days of Skype and the company’s evolution from scrappy start-up to tech titan.

Let’s start with the code. The foundation of the original Skype was its P2P backend. This allowed people to make calls by directly connecting them to another user. Yes, this sounds simple, but do you remember how expensive making international calls was in 2003? Skype was a revelation; a free and easy way to communicate.

The P2P backend it was built on was developed in Estonia by Ahti Heinla, Priit Kasesalu, and Jaan Tallinn, something they originally developed for the aforementioned (and nostalgia-inducing) KaZaa.

Now, if you’re of a certain age, KaZaa will mean an awful lot to you. The software was one of the titans of digital piracy, and the impact this had on many writers at TNW is documented here. Basically, those days felt like a time of freedom, of potential – a time when the internet‘s impact seemed infinite. And it was P2P technology enabling this.

The basic idea behind P2P technology was decentralization. Rather than having to download a file from a server along with numerous other people, you connected directly to a number of users who had it, grabbing parts of the data from each of them. This increased download speeds and made sharing anything possible.

Oh, and it was free. All free.

As someone who lived through this era, it was glorious. It opened up the world, introduced me to a world of new experiences, and truly connected people. It was DIY and, well, exciting.

But, it couldn’t last

Just as big business put pressure on file-sharing systems and, eventually, shut the majority down, Skype also succumbed to pressure.

It was bought by eBay in 2005 for $2.6 billion, before finally being purchased by Microsoft for $8.5 billion in 2011. Along this journey, founders, and originalemployees left. Skype abandoned P2P technology as it wasn’t suitable for the current environment.

In a way, the business mirrored the journey of the internet as a whole: from scrappy to establishment. While this might seem like a tale of the early internet‘s demise, there’s a P2P success story in here: Estonia itself.

One of the things that Erm mentioned was just how much money was invested into Estonia since the creation of Skype. The software put the country “on the tech map” and led to substantial investment across the country. Hell, in 2018, Estonia received a record amount of funding.

It’s not just about the money

Erm also described how many Skype founders and early employees ending up starting other businesses in Estonia. This point was raised again by Maarika Truu, the Head of Startup Estonia, a government initiative that supports the country’s burgeoning companies. She pointed towards the early Skype employees now in leadership roles at TransferWise, Bolt (formerly Taxify), and Starship – some of the country’s leading, and most successful, startups.

Excluding Skype, Estonia has had three tech unicorns (privately owned companies worth over one billion dollars). Two of those (the aforementioned TransferWise and Bolt) are directly linked to Skype, with founders of those businesses coming from the communication software company.

Effectively, the knowledge and experience Skype employees accrued spread across Estonia. Connections were made and information shared. Success begat success. So, in a weird way, Skype kickstarted a human-centric P2P system in Estonia.

Yes, Skype might be unrecognizable from the days of the early internet, but the spirit that inspired it isn’t dead. That can still be seen in Estonia‘s startups and business culture today.