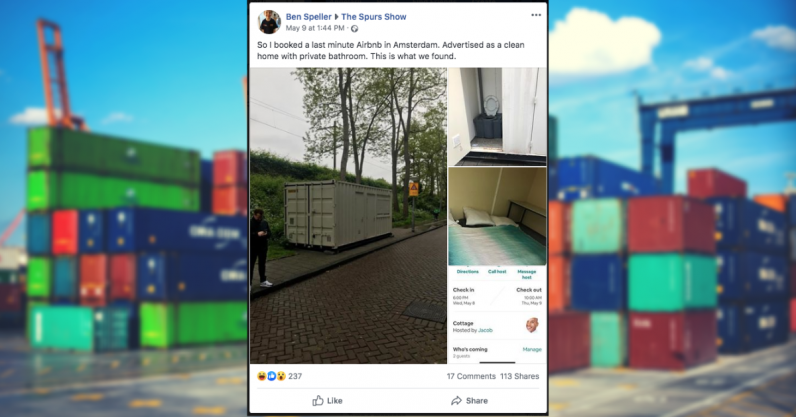 Airbnb is notoriously disruptive; whether it’s revolutionizing the hotel industry, causing housing shortages, or unveiling humans’ endless capacity for greed — which has hit an all time low now in Amsterdam.

Ben Speller showed up to Amsterdam to see the Tottenham Hotspurs boot out Ajax in the Champions League (sad), only to find out the €134 ($150) “clean home with private bathroom” was a shipping container. A shitty container propped up on the side of the road.

In an interview with Amsterdam news site AT5, Speller said he walked away as soon as he opened the depressing container.

After Speller had arrived the host had changed the listing to add the somewhat, incredibly important detail of “container-house.”

This sounds so terribly shitty that this must be a one-off case, right? Nope, AT5 reports it found another illegally parked shipping container in the city believed to be rented out by the same host.

The containers have now been removed but the police have yet to find “Jacob” who rented them out on Airbnb. The fraud is currently under investigation by municipal authorities.

Judging by the images on AT5’s website, the second container was just as lovely as Speller’s abode.

If you’re looking for alternatives to Airbnb, you might want to keep an eye out for projects like FairBnB. However, if you’re a sucker for shabby-chic containers, I’m sure we can sort you out when you come visit our conference next year.

Read next: Bitcoin is having a great 2019; altcoins, not so much