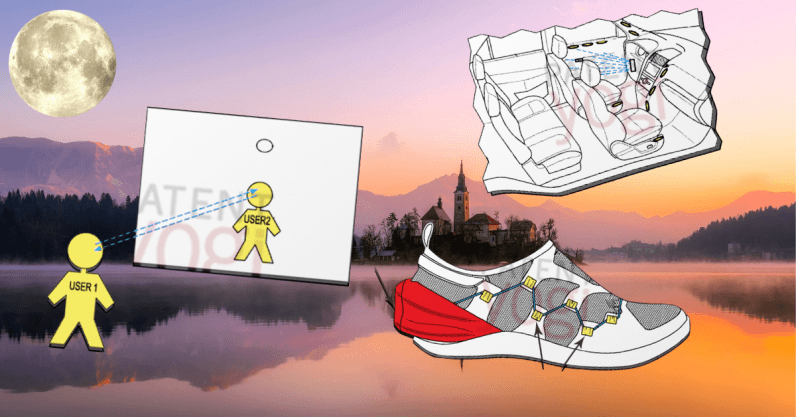 Ugh, the Gregorian calendar is so boring. That’s why we’re disrupting monthly series with a lunar cycle-based series about the best patents of the last synodic month, picked by the PatentYogi team. Get ready when that moon gets gibbous, y’all. This April-ish roundup lands on the cute Pink Moon!

Since my last post, the US patent office issued over 29,089 patents and published over 27,807 patent applications. Each patent asset adds a little something new to the human knowledge base. As I cannot list all these patent assets here, the PatentYogi team has selected the five most interesting patent assets. Enjoy!

Roger Staubach, the Hall-of-Fame football player and former quarterback for the Dallas Cowboys, once said, “There are no traffic jams along the extra mile.” This might be true for sports; however, in cities across the world, the last mile travel is a major problem for travelers. Often, people have to park their cars far away from the target location due to traffic congestion in the city centers.

A recently published patent application from Ford describes a unique solution to provide last mile connectivity. Ford plans to sell cars with ‘hoverboards.’ When required, you can mount the hoverboard to reach your target location. The hoverboard has a light and sturdy platform made up of carbon fiber. It also has Mecanum wheels to provide stable, and omnidirectional movement capabilities. Other features include obstacle detecting and automatic balancing.

What’s even more interesting is that the hoverboard can be used with extensions like wheelchairs. You can stow it in the back of your car, as shown in figure above. With a range of 5 miles on a single charge, the hoverboard will help you get through a day’s activities without breaking a sweat.

Nike is constantly coming up with new and impressive shoe designs, the latest release coming in the form of the Nike Adapt BB, the first basketball shoe to feature power-lacing. If a recently published patent application is to be believed, Nike is already looking to improve on its latest release.

The new shoe features a power-lacing system with a motorized tightening device which will tighten and loosen the laces, a control unit to control the tightening, and a battery. As shown in the figure above, the lace passes through ‘lace receiving members’ placed along the forefoot and midfoot section of the shoe. The tightening device is located towards the heel portion in a housing and is removable.

The power-lacing system automatically loosens or tightens the shoe based on the size and shape of your foot, and based on what you may be doing. For example, if you are running, and your feet start to swell, the shoe will loosen to maintain a comfortable fit. You can also control the fitting using your smartphone.  Nike also seems to be looking to diversify, saying that the shoe could be a casual shoe, or could be a cleat for athletics or football, or a basketball sneaker.

All we have to do now is wait for the shoe to drop in the market. Who’s copping a pair?

Walt Disney was known to use storyboarding to quickly show and share progress on his projects to his team. Storyboarding is an important initial step in the creative process of filmmaking, and is mostly done using specialized software requiring manual inputs. All this may soon change. A recently published patent application reveals an automated storyboarding system invented by Disney.

The system takes in a script as textual input, and then analyzes and parses it using Natural Language Processing. Details like character names, locations, actions, and dialogs are obtained from the script. Likewise, emotional states, positions, and relationships are also extracted from the script.

Then, 2D or 3D visualizations are automatically generated showing scene elements, including characters, props, and cameras in each scene. The visualizations are updated in real time based on any updates that you make in the script. Another exciting feature is that the system will recommend a camera shot (like a ‘long-shot’ or a ‘medium shot’) for each scene, as shown in the figure above.

The invention looks set to revamp and revolutionize the entire storyboarding process.

With an upsurge in the number of ride-hailing apps, people are opting for catching a ride  instead of driving themselves, leading to cars being used as public transport. A typical cab will pick up and drop off 15 passengers a day. Cleanliness obviously becomes an issue as the number of passengers in a cab increases. A recently published patent application from Ford describes an innovative solution to curb this rather new problem.

As shown in figure above, the patent application describes a vehicle cleaning system that receives environmental data including cabin humidity data, cabin temperature data, cabin surface sunlight data, surface moisture data, cabin airflow data, and the like, from multiple sensors in the car. This data is analyzed by an on-board computer to find out potential contaminants (e.g. bacteria, fungi, and virus), and determine a required UV dosage to clean the cabin.

The computer then adjusts the wavelength, intensity, and exposure duration of the UV light based on the required UV dosage. The UV dosage is set so as not to harm the interior of the vehicle, like the interior trim, and moldings.

The computer also controls other cabin variables like temperature and moisture to limit the growth of the contaminants. The computer also detects human presence and stops operation of the UV light.

It remains to be seen how soon this system is implemented by auto manufacturers worldwide.

IBM has invented an eye contact-based information transfer system. A recently published patent application from IBM describes how you will be able to transfer information with other users just through eye contact, almost telepathically, as shown in figure above.

For example, you could be giving a presentation to an audience, all wearing head mounted devices like the Google Glass. During the presentation, if you need to transfer the presentation file to an audience member, the two of you only need to make eye contact, which will lead to your head mount devices recognizing each other through Bluetooth, Wi-Fi, or NFC. Then, the file is transferred as long as the eye contact is maintained.

Handy, isn’t it? Transferring information just by a look is surely cool.

Look out for the latest lunar cycle-based patent update every full moon. Next up is the beautiful Flower Moon in late May. See you then!

Read next: What founders can learn from poker players about when to quit