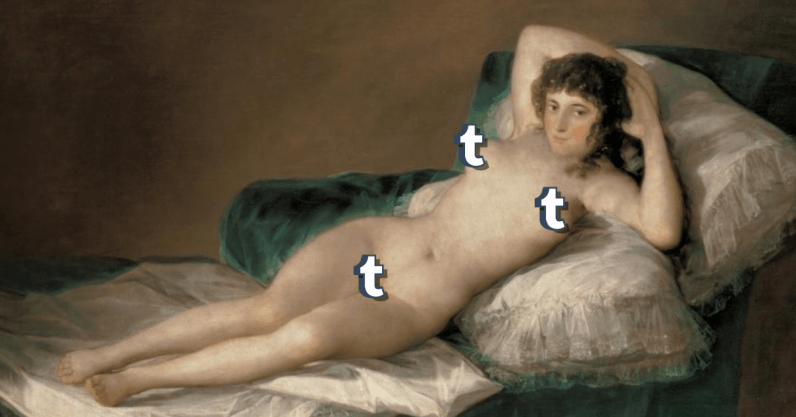 Tumblr explained its decision to clamp down on NSFW material in a blogpost: “Adult content will no longer be allowed here. While we do not judge anyone for their desire to post, engage with, or view this stuff, it is time for us to change our relationship with it.”

The platform’s new porn-flagging algorithm is already in action as it has hidden multiple posts, GIFs, and videos depicting sexual acts or full-frontal nudity.

This controversial announcement has already threatened the livelihoods of many artists that use Tumblr to showcase their work. But it seems the algorithm is completely botched as users are criticizing the platform’s auto-detecting algorithm of incorrectly flagging inoffensive and innocent posts as explicit.

So far, many Tumblr users have taken to Twitter to show what content has been incorrectly flagged already — highlighting how the algorithm is capable of making serious, and often strange, errors.

One user tweeted how two photos of her fully clothed and a picture of a vase was reported as “NSFW” whilst another user screen-shotted a flagged Tumblr image of a harmless dinosaur bone.

I just went through the 12 most recent pages of my Tumblr archive and these were the only three photos flagged. Two photos of me fully clothed and a picture of my vase ¯_(ツ)_/¯ pic.twitter.com/dUG5K8lbCy

Too hot for Tumblr pic.twitter.com/41x5cHTtVb

All the water in Atlanta is unsafe to drink and my digital paintings of caves are too hot for Tumblr to handle. pic.twitter.com/IGckljHlqB

In Tumblr‘s attempt to hide “offensive” posts considered as NSFW, it has also threatened the livelihoods of creators on its platform, raised ethical questions surrounding posts depicting the LGBTQ community, and removed safer erotica content for women. The future of Tumblr is unsettling.