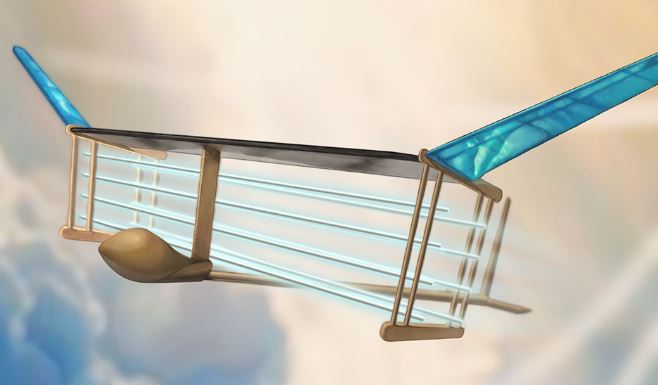 Inspired by Star Trek, researchers from MIT have successfully demonstrated that a plane can fly silently using ‘ionic wind,’ without needing any moving parts such as propellers, turbine blades, and fans. Read on for a video of it in-action and additional information.

‘Ionic wind’ is based on the principle that a wind is generated in the air between two electrodes when current passes between them. When enough voltage is applied, a thrust can be produced with the “ionic wind” to power a small plane without the need for any moving parts. The phenomenon was first identified in the 1920s, but it is only just been applied successfully in avionics.

In the model drone used for the study, the front portion of the wing produces enough of an electrical field in a portion called the emitters to ionize air – removing electrons from air molecules thus charging them and creating positively charged ions. These ions are attracted to negatively charged structures on the plane’s other end called collectors. When the ions move to the collectors, they collide with air molecules and transfer energy to them, creating a flow of air that thrusts the plane in the opposite direction.

In the long term, I’m hoping for ultra-efficient and nearly silent airplanes that have no moving control surfaces like rudders or elevators, no moving propulsion system like propellers or turbines, and no direct combustion emissions like you get with burning jet fuel.

It’s worth noting that this model does not seem easily scalable to large aircraft. The MIT team’s model drone could convert only 2.6 percent of its input energy into thrust. A large part of the success was due to the team’s computer aided design approach, and the decision to use super light weight building materials such as carbon fiber, balsa wood, a plastic called polystyrene, shrink-wrap plastic, and Kevlar – none of which are ideal for building sturdy commercial airplanes.

The current design was arrived at after trials with models of varying weight, wingspan, and energy for thrust. Finally, a 5-meter-wide, 2.5 kilogram, multi-decker craft flew after a few false starts – but only for about 10 seconds.

The team was limited by the length of their testing room, but the demonstration was enough as a proof of concept that ionic drive can sustain flight significantly longer than is possible with just gliding.

The results of the test flight were published yesterday in the science journal Nature, and you can read more about them here.

Read next: This Japanese extension will disguise Twitter as Slack so you can pretend to work