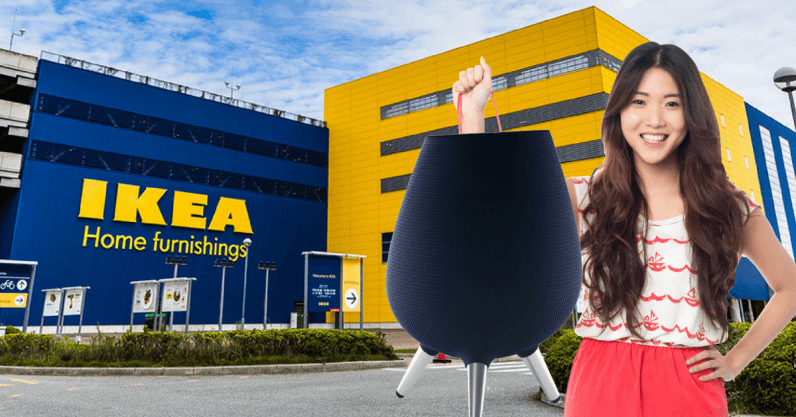 Today, at a standing-room only event in New York City, Samsung unveiled the Galaxy Home. This is the first smart speaker from the South Korean tech giant, and comes with the Bixby smart assistant at its heart.

Another thing: it also looks a bit like an inexpensive IKEA stool. The Galaxy Home, unlike the Google Home speaker and the ubiquitous Amazon Echo, is perched upon a tripod, and is coated in a delicate grey fabric. I’m not the only person to notice this.

Galaxy Home looks like the Google Home on legs that you would see on a chair in IKEA https://t.co/zO9E3Gluf8

Squint a bit, and it bears an unmistakable resemblance to Swedish furniture firm’s NILS stool. Thanks to its padded (and machine-washable) cushion, the NILS is arguably the most comfortable stool that looks like a Galaxy Home in IKEA’s lineup. That comfort comes at a price, however, as the NILS retails for $54.99.

If you ask NILS a question, it’s unlikely to respond with the correct answer. The same is true of the Galaxy Home, but that’s just because Bixby is a bit crap.

The Galaxy Home could also be regarded as the better-looking cousin of IKEA’s RÅSKOG Stool, available in-store for $24.99.

The RÅSKOG stool is easy to move, thanks to the helpfully placed hole in the middle of the seat. Its plastic feet ensure it doesn’t slip on damp floors. It doesn’t play music.

Were the MARIUS stool and the Galaxy Home separated at birth? I’m not sure. It’s certainly possible.

You can pick up the MARIUS for the bargain basement price of $5.99. Samsung is yet to announce pricing for the Galaxy Home, but the Homepod-alternative is likely to cost a fair bit more. On the plus side, it won’t arrive flat-packed, and you won’t need to find an hex key to set it up.

You can buy any of the aforementioned stools today. If you’re desperate to get your hands on the Galaxy Home, however, you’ll have to wait a bit for Samsung to announce availability.

Read next: Samsung's Note 9 is a welcome return to obscene specs