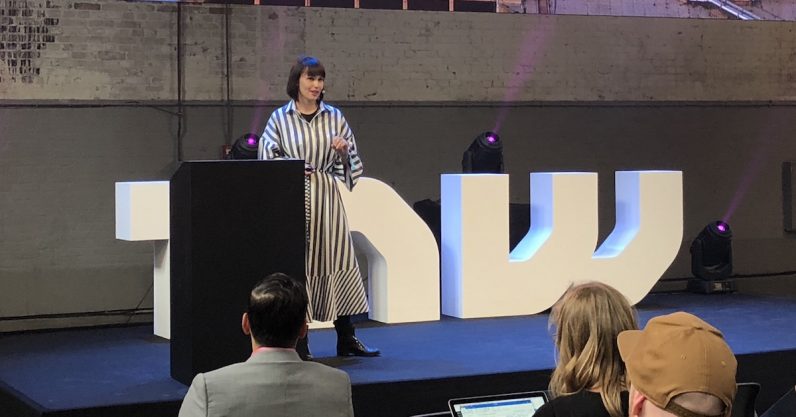 Speaking at today’s TNW Conference, Diana Wehmeier connected the origins of technology with the creativity of science fiction — and how the books and movies everyone loves can inspire those who would make the fiction a reality.

Wehmeier, the CEO and Creative Director of Plasma magazine, said science fiction is what puts the visions in the minds of the creators:

All these millionaires who want to go to space — it’s not just about glory or profits. They want to fulfill childhood dreams inspired by science fiction.

Wehmeier opened by describing what at first sounded like a real-world scenario: People from all over the world traveling to Florida for a glimpse of the capsule that would deliver a man to the moon. The twist, in this case, was that she wasn’t describing the actual Apollo 11 launch in 1969, but something 100 years older.

Jules Verne, she pointed out, predicted the Apollo 11 moon launch with startling accuracy in his 1865 novel From the Earth to the Moon. He was off on a few points (he thought the capsule would be launched by a giant cannon), but otherwise he was fairly close to the mark.

Technology, Wehmeier contends, takes its cues as much from fiction as the reverse — and as technology progresses, fiction is able to give us a more and more realistic vision of the future. For example, The Martian gave the public a realistic vision of what the colonization of Mars would be like, having taken its cues from current spacefaring technology.

As a more recent example of art and life imitating each other, Wehmeier showed off SpaceX’s new space suit, which was designed by Hollywood costume designer Jose Fernandez, whose work you can see in Batman v Superman or Captain America: Civil War.

In conclusion, Wehmeier says she encourages anyone who wants to create the technology of the future to create a story in which that technology exists. It doesn’t have to be a good story, she insists — but it will give you a vision of what you want to achieve with your ideas.

Read next: TNW Conference 2018: What you need to know