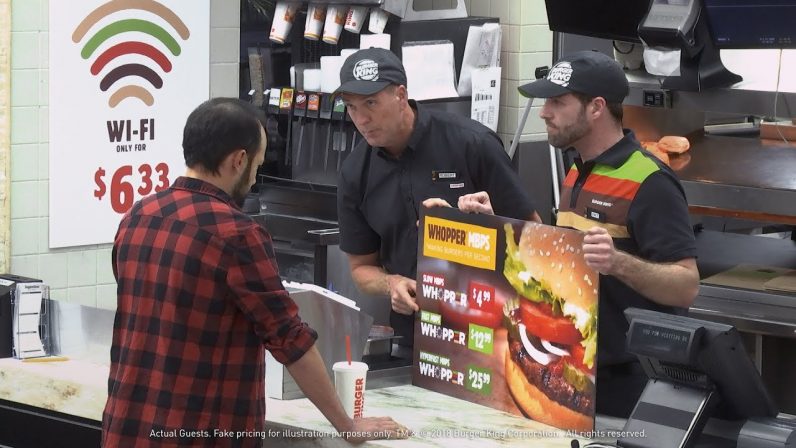 Net neutrality is the current cause du jour, and rightfully so. If undermined or eliminated, it could have lasting consequences for tech innovation in America. The thing is, it’s a really complicated topic. If you’re not particularly technologically clued up, you might struggle to grasp it.

Burger King is an unlikely champion for Net Neutrality, and has created a video that “explains” it through an even unlikelier device: the Whopper. If you’ve ever wondered what it looks like when a fast food company wades ineptly into a topic it scarcely understands, you’ll probably want to watch this:

The premise is pretty simple. People go into a Burger King and order a Whopper, but are told they’ll have to wait for their meal, as they failed to stump up for a premium package.

This is supposed to be analogous to Internet packages where certain categories of content — like streaming video — aren’t available unless you pay extra. The problem is, it’s a really clumsy metaphor.

If you don’t really understand the issue, you’ll just assume Burger King is talking about download speeds. That’s really not what network neutrality is about.

On a neutral network, you can still pick a slower and more affordable broadband plan, so long as all content is treated fairly. An ISP can’t unfairly expedite traffic from one source, or penalize packets from another. The Internet has to be an even playing field, where all can compete and build new things.

In the video, the Burger King cashier briefly mentions how the company wants to “focus on chicken fries and chicken sandwiches,” and is therefore slowing down the Whopper. This part is quickly brushed over, and feels poorly executed. I’m not sure what Burger King was thinking. This video just didn’t explain net neutrality particularly well.

Sticking with the theme of fast food, a better (but still pretty clumsy) metaphor would be the car you drive to your favorite burger joint.

Let’s imagine a scenario where Tesla has partnered with, say, Wendy’s. As part of this (completely fictional) partnership, Tesla has installed sophisticated sensors on its cars that can immediately detect the food you’ve got on your back seat.

If you’re bringing McDonald’s home, the sensors will snitch to your car’s computer. All of a sudden, you’ll find yourself unable to drive over 40 miles per hour, unless you either ditch the food and get yourself a Baconator, or pay an “unsupported burger surcharge.”

In that scenario, Tesla (the ISP) isn’t treating all network traffic (burgers) equally. It’s prioritizing one (Wendy’s), and penalizing another (McDonald’s).

I’m going to assume that Burger King broached this issue with the best of intentions. It feels a bit cynical, and like Burger King’s marketing department produced this video not out of any sort of genuine concern for Net Neutrality, but rather to produce a viral hit. Y’know. The type that gets tweeted and blogged about (kind of like what I’m doing now).

Still, let’s assume Burger King’s intentions were pure. It doesn’t matter. Clunky efforts like this have the potential to muddy the waters, and undermine the broader fight to save net neutrality.

Read next: Learn how top marketers sell virtually anything online