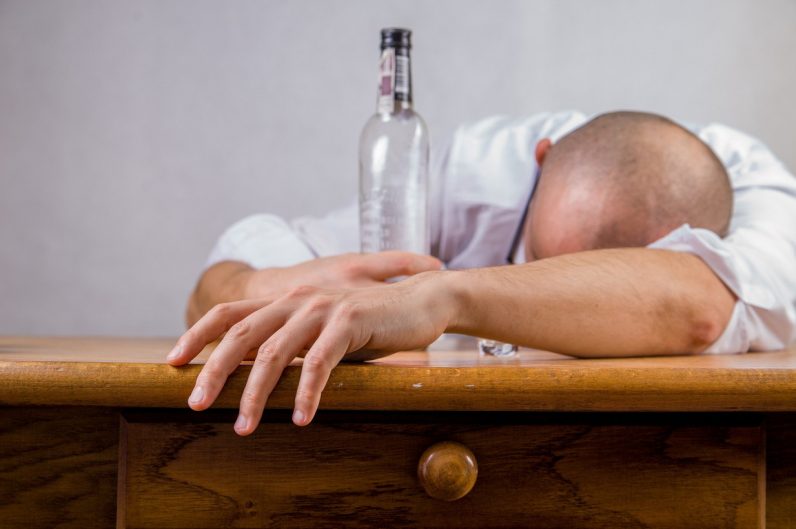 Tech has a drinking problem. Nowhere is that more apparent than during the holiday season. Across the world, hard-working and hard-partying startups are throwing their employees lavish parties, with moats of free alcohol for the taking.

And over the past few years, a myriad of startups have emerged with products that promise to deal with the morning after the night before. The most notable is Silicon Valley success story Morning Recovery, which got off to an ostentatious start when it raised $250,000 on Indiegogo in just one month.

The weirdest one is in Las Vegas. There, you can find Hangover Heaven, which is a converted bus stocked with rehydrating IV drips. For $159, you can flood your veins with “Dr. Burke’s Redemption 3.0 IV Hangover Cure,” which comes with a choice of either nausea or headache medicine. If you want both, it’s $199.

Hangover cures are a big business, and it’s getting bigger. A couple of weeks ago, a tech publicist emailed me about a new product called YourSaint. Drinking this, she explained, would ensure a hangover wouldn’t get in the way of a productive day after a heavy night on the sauce. I was intrigued, so I requested a review unit.

The following week, two packages arrived at my door. The first of which came in a single faux-leather cardboard box, and contained four bottles of the YourSaint VIP Concentrate.

Using this felt almost like I was doing a high school science experiment. YourSaint actually requires you to measure out a serving with the included pipette (between four to six drops), and place them in a glass of water. It also gives instruction how you’re supposed to consume it.

The side of the bottle listed just three ingredients: water, sulfuric acid, and cupric sulfate. When added to a bottle of mineral water, it gave it a strange flavor. I’d describe it almost like an Alka Seltzer, but without the effervescence, and quite a bit more sour. It tasted medicinal, almost.

The second package to arrive was a small box of YourSaint shots. I couldn’t help but notice they looked like miniatures of Skyy Vodka — at least at first glance. That made me laugh.

The bottle’s label made some big promises, saying it “neutralizes the effects of alcohol,” and how it “provides the necessary components for the complete metabolic pathway of alcohol in the body.” Drinking it, the bottle said, will remove the “effects of hangovers.”

In addition to what’s already in the concentrate, the shot contains seven active ingredients: ginger, taurine, vitamin C, vitamin B6, vitamin B12, grape seeds, and shiitake mushrooms. Most of these should sound reasonable if you’ve ever looked at the side of a Red Bull can, or a 5-Hour Energy shot. And indeed, many (myself included) turn to energy drinks in order to abate the worst of a hangover.

The shot had tasted strongly of ginger. It was palatable, but not exactly moreish. It definitely could have used a bit of sweetness.

In the name of journalism, I roadtested both after heavy nights of drinking. I wanted to give the product a fighting chance, so I adhered by two rules: the first was I’d get to sleep at a reasonable time.

I also didn’t drink too heavily, figuring that if I get to the point where I’m puking up pieces of my own stomach lining, there’s probably not a lot it can do for me. Both nights, I had five cans of crap French lagers (Kronenbourg, if you have to ask), a few steep glasses of bourbon, and a couple of White Russians. It’s a lot, sure, but it’s not exactly what you’d call excessive.

And did it work for me? It’s hard to say. Both nights, I didn’t wake up with a headache — but then again, I seldom do. Nor did I wake up with an upset stomach that left me chained to the toilet for hours. For me, hangovers present themselves as an unbreakable sense of lethargy, and both days I felt really sluggish.

But could I read too much into that? Aren’t hangovers (and hangover cures) unique to the person experiencing them? I know people who wake up with raging headaches, and some people who don’t get hangovers at all. Some of my friends believe a full English fry-up to be the superior hangover cure, while others swear by energy drinks and cigarettes.

I was curious about the science behind YourSaint, so I spoke to Dr Joris Verster. Verster is an Associate Professor of Pharmacology at the University of Utrecht who specializes in the science of hangovers. He has published countless academic papers on the subject, and is as close as you’ll get to an authority on the subject.

Verster was skeptical, saying “any claims with regards to the individual ingredients are not substantiated by any scientific research.”

“I am not aware of any scientific study that investigated the efficacy or safety of YourSaint,” he added. “In short, any claim that the product is effective or safe is not supported by scientific evidence.”

For what it’s worth, YourSaint says it is approved by the UK’s Food Standards Agency and the Danish Food Association.

The overlap between tech and drinking

So, scientifically speaking, the jury is out. But what I find most interesting is the link between tech and alcohol.

These hangover cures aren’t coming from the labs of Bayer, or GlaxoSmithKline, or any other big pharma company. They’re coming from those who’ve worked in the technology industry.

Remember Morning Recovery, which I mentioned at the start of the piece? That company was founded by a product manager at Tesla, who had previously worked at Uber and Facebook.

Similarly, the resume of YourSaint’s founder, Jorgen Koefoed, lists an incredible number of technology companies. Furthermore, YourSaint was pitched to me by one of the most well-known tech PR agencies around — Blonde 2.0. So, what is it that draws those working in the technology industry into trying to solve this problem?

Most people I spoke to said that the reason is most technology networking events are ultimately centered around the copious consumption of alcohol. Go to any conference or workplace party, and you’ll find free bars, and even drinking games.

This is something I’ve experienced personally. I was at a tech conference in London in November, which concluded with a two-hour open bar. I was with a friend, and we used the opportunity to drink as much as possible without having to pay London’s extortionate prices. We each drank about eight beers and several (I stopped counting) glasses of wine.

We weren’t alone. I saw some people double-fisting drinks, and others drunkenly trying to play Dance Dance Revolution. It felt like a gin-soaked version of The Purge, but without the murder. People were purging themselves of… what? Thought? Stress? Contemplation?

While writing this piece, I heard some legendary tales of debauchery. I’m conscious of the fact that it’s inappropriate to have ‘favorites’, but the best story I heard involved a workplace party at an airport hangar, where some employees got shitfaced and ended up breaking into a decommissioned passenger aircraft. Once inside, they sat in the pilot’s seat of the aircraft, which was a big no-no.

When the venue found out, they removed the employees from the plane, and grassed them up to their employer. The employer is no longer welcome to hold their Christmas parties at that particular venue.

I also heard stories of people getting drunk at conferences and missing flights and presentations. Of people getting fired and arrested. For awkward techies, alcohol might make them feel a bit more confident and gregarious, but it can also bring out a darker side to them.

Given there’s a lot of overlap on the venn diagram between tech and alcohol, it makes sense that some might try to hack the aftermath. But I can’t help but feel this is merely sticking plaster over what amounts to a glitch in tech’s culture.

Read next: Stay safe and organized with the email manager that works for you 24/7