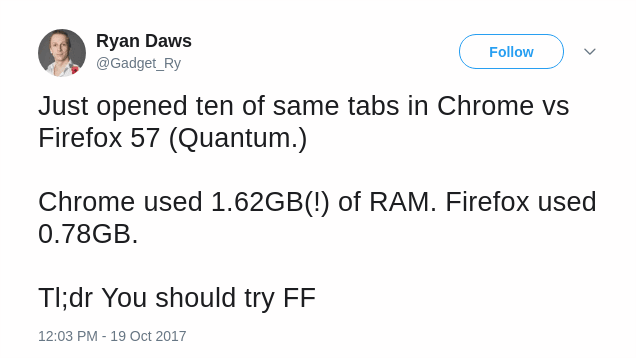 I don’t recall being this excited about a Firefox browser in a long time. The first official release of Firefox Quantum drops tomorrow, and even if you’re firmly cemented into the Google Chrome camp, it’s absolutely worth a look.

We covered the beta launch of Quantum a couple of months back. The biggest thing to note here is speed: Firefox Quantum is ridiculously fast, at least compared to earlier editions of Firefox. It boasts a new CSS engine, written in the company’s Rust programming language, that can work in parallel across cores, rather than just using one.

Given that everyone and their grandmother is rocking a multi-core setup these days, this is a welcome leap forward. Quantum also does some trickery with tabs, prioritizing them in the order they’re used, making it up to 30-percent less RAM hungry than Google Chrome.

Some tweaks are skin deep — although, that’s not a bad thing. Visually, Firefox Quantum is decidedly different, thanks to the Photon UI. This is a more minimalist take on the ubiquitous open source browser which, as an added bonus, looks great on high-DPI displays.

If you can’t wait until tomorrow, you can grab the beta here, which is available across all platforms. Otherwise, click here and drop your email. Mozilla will let you know when you can download the final product.

Read next: I enlisted a free AI to troll email scammers – it was hilariously effective