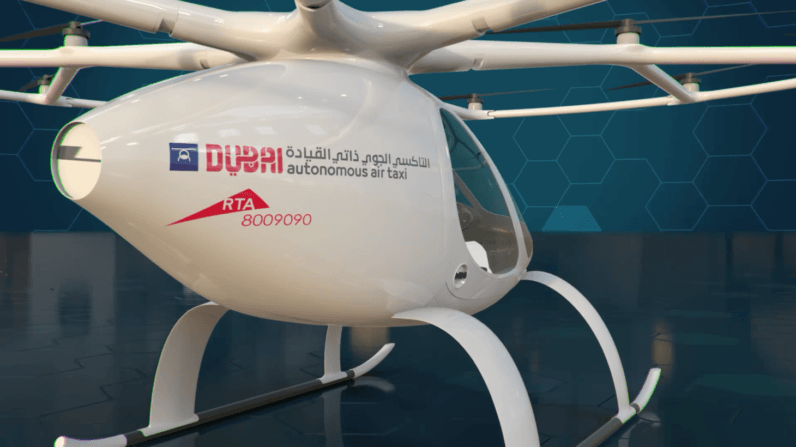 Dubai’s authorities on Monday announced that a successful ‘concept flight’ of an autonomous hover-taxi service had taken place. Details are scarce about the route taken, although (predictably) no passengers were taken along for the ride.

The prototype electric hover-vehicle was designed by Germany’s Volocopter. Specs wise, it can soar across the Dubai skyline for 30 minutes, with a maximum speed of 100 kilometers per hour (62 mph).

Should things go awry, the vehicle can deploy its emergency parachutes, or switch over to its nine independent battery systems, in order to make a safe landing.

Dubai’s transport authorities expect air-taxis to become a fundamental cornerstone of the city’s public transport; much like busses, subways, and ordinary taxis. Passengers will be able to book air-taxis through an app, and track its journey and arrival, much like Uber.

But don’t expect it soon; Dubai’s transport chiefs expect it’ll take five years for it to become a thing, as they figure out the safety and legal aspects of the service.

By that time, air taxis may already be a thing. Uber is currently working on an on-demand air taxi product, and has set an ambitious goal of launching a passenger service in Dallas and…. you guessed it… Dubai by 2020.

It makes sense that Dubai would be a focus city for this technology. For starters, the stereotype is true: the tiny emirate boasts a large community of fabulously wealthy individuals, who are happy not only to pay for convenience, but also for a ‘prestige’ service.

Given air taxis will likely cost a handsome premium when they launch, they fit that description pretty well.

But an Uber-like flying taxi service could offer a way out for that, allowing those with the adequate means to get around the city more easily.

Read next: 6 tricky SEO challenges - and how to overcome them