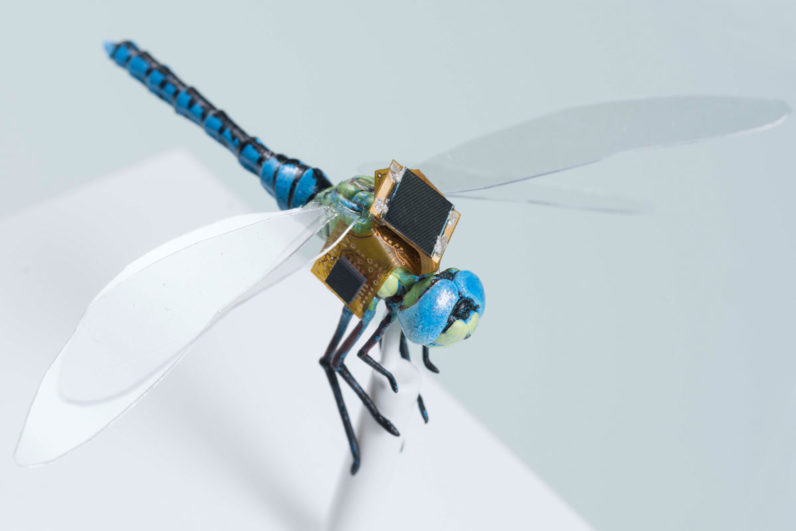 The DragonflEye project sets out to create cyborg drones that can be steered by humans. It outfits live dragonflies with ‘backpacks’ that contain a sensor array and a solar power source – and then uses neural networking to control their flight paths.

Watch what may be the world’s first cyborg-drone flight in this Draper project video:

In the 36 second clip, Draper shows a live dragonfly being outfitted with the technology. In the video, a gooey substance, likely a binding agent, is applied to the dragonfly before a technician fits it with a tiny sensor bundle.

Once the insect is geared up the technician releases it and we see it fly – seemingly unencumbered by the backpack. The clip shows the dragonfly moving in a straight line for a brief moment and then the video ends.

We aren’t told if the insect, in the video, is being commanded to fly straight – or if that’s just where it ‘wanted’ to fly.

In a January press release the company detailed its process: they pipe in light to the dragonfly’s optical nerve which simulates the insect’s own natural navigational cues.

Draper engineers had to overcome various obstacles to make the tech work, such as creating an optrode small enough for the dragonfly’s optic nerve.

The project advances several bleeding-edge technologies, according to the principal investigator on the project, Jesse Wheeler. “This system pushes the boundaries of energy harvesting, motion sensing, algorithms, miniaturization and optogenetics, all in a system small enough for an insect to wear.”

It even appears to be ethical

The process seen in the video appears to be harmless to the insect. The engineers claim the same tech can be applied to other insects as well. Bumblebees, for example, could be directed to pollinate specific fields — and then optimized.

There are a lot of applications for tiny, silent, virtually undetectable, drones in the intelligence and military communities. The tech could be useful for more than just flying bugs as well — Wheeler predicts “Someday these same tools could advance medical treatments in humans.”

The technology is still early – Draper hasn’t released any information concerning the back-end requirements for the technology or when it would be available for adaptation. For now, it’s a very cool glance at the near future – one where I can picture fireflies directing traffic and army ants conducting 3D printing missions.

Read next: Amazon fights poverty with Prime discount for those on food stamps