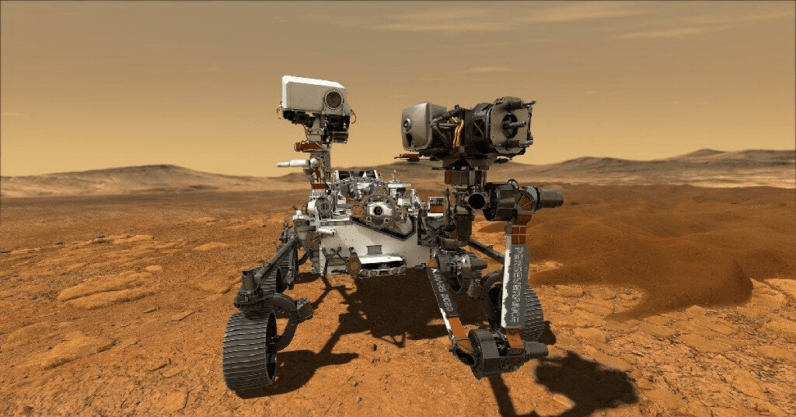 Next spring is going to be a busy time for Mars. In close succession, three spacecraft will arrive at the planet, joining the dozen or so craft already circling Mars. Two of the spacecraft were launched in the past couple of weeks by newcomers to martian exploration: the United Arab Emirates’ Al-Amal (meaning Hope) and China’s Tianwen-1 (which means Question to Heaven).

The third vessel will be NASA’s Mars 2020, containing the Perseverance rover, which just took off successfully from Florida. While this rover will be just one of many on the red planet, it is our best bet for finding life there for the time being.

The sudden flurry of activity is a result of planetary dynamics: every two or so years, the orbits of Earth and Mars align so that the two bodies are at their closest to each other. This results in a shorter interplanetary transit time, of just over six months. The next such launch window will not be until 2022 – when it is expected that the European Space Agency’s ExoMars 2022 will join the throng.

It is legitimate to question why we keep sending rockets to Mars. Surely we have acquired enough images of the surface and its landscapes to know that water used to be there, but has now vanished? True enough – but there are still mysteries to solve: when did the water go, and why? And, of course, the biggest question of all: is (or was) there life on Mars?

The three missions have different objectives: Hope will orbit the planet for at least two Earth years (one Martian year), acquiring data on Mars’ weather – just like the weather satellites orbiting Earth. Tianwen-1 will orbit Mars and is carrying a rover that will be parachuted down to the surface at Utopia Planitia, where it will analyze the soil and take images of the surface.

Perseverance will arrive almost at the same time – but a couple of thousand kilometers away in Jezero Crater. It will be deposited on the surface by sky-crane technology (see the video below), the same method that delivered Curiosity so successfully in 2012.

Perseverance carries a full complement of scientific instruments that will measure all the usual things that get measured on Mars: the chemistry and mineralogy of the rocks and soil, the amount and type or organic material present at and just below the surface, and so on. But there are two other features of the mission that make it unique.

First of all is the helicopter/drone – called Ingenuity – that will be released from beneath the rover. This will fly from Perseverance and circle around before landing away from the rover. It is not certain what the range of the drone will be – although the flight will only last a few minutes and Ingenuity will land only a few meters away from the rover.

The idea behind the flight is to test the concept of atmospheric flight on Mars. Eventually, it is anticipated, drones will be able to fly for much longer and for greater distances. This could help guide rovers, identifying features worth investigating and hazards to avoid.

The second unique feature is a drilling and caching system. Perseverance is the first rover to have the capability to drill a core, about ten centimeters long and one centimeter in diameter, and extract it intact from the drill hole. Perseverance will take samples from a range of different rock types as it traverses the crater floor. The drill cores will be left in a small pile – a cache – for collection, possibly in early 2027, and subsequent transport back to Earth (estimated arrival time is still not known, but maybe around spring 2032).

Why is it so important to bring samples back from Mars? The instruments carried by Perseverance will be able to undertake fairly sophisticated chemical analyses of the rocks and soil. But even though the instruments and measurements are a tremendous achievement, they do not have the full range of equipment that we employ on Earth to squeeze every drop of information from a rock.

Tests to check for organic compounds – and whether they might have a biological origin – require a chain of different analyses that are far too elaborate and complex to be undertaken on Mars. Boiling acids, alcohol rinses, addition of chemicals, subtraction of solids, are steps in the chemistry needed to extract and separate organic molecules from their rocky hosts. This just cannot (as yet) be done on Mars.

The rocks will be weighed and measured practically on a grain-by-grain basis and analyzed, in some cases down to the individual atoms from which the material is composed. This will be an international effort – there is already a multi-national panel (called MSPG-2) which will draft the requirements for the first sets of analyses and how the samples will be stored, curated and subsequently distributed to the wider scientific community.

There is another set of reasons to bring samples back from Mars – the future of human exploration of Mars. If we send humans to Mars, we have to know how to bring them back again. We have not returned anything directly from another planetary body since the Apollo 17 astronauts left the Moon in December 1972. Yes, we have captured bits from a comet and an asteroid and returned them to Earth – but those missions did not land, collect and come back.

We have been investigating Mars for a long time: for over 150 years by telescope, 50 years from orbit and 20 years by rovers. Only another 12 years, then, before we can analyze Mars in our own laboratories.

Perseverance to get things done is a gift of humanity. Here’s hoping that the rover will live up to its name.

Read next: This Chinese EV maker is bringing its small affordable cars to truck-loving Texas