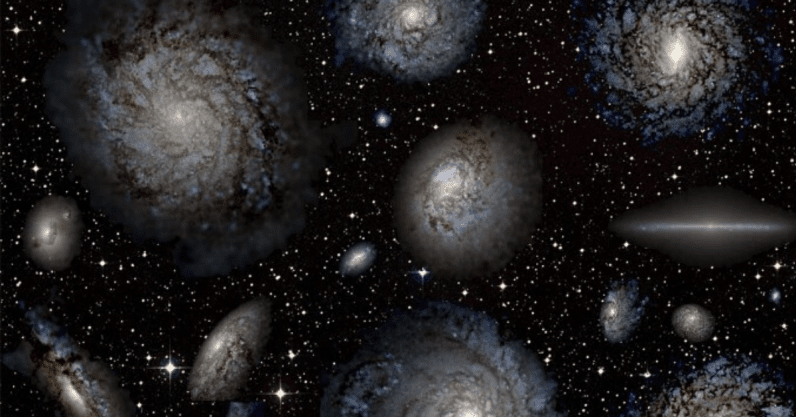 The Milky Way contains hundreds of millions of stars, but not all of them are native to our galaxy. Astronomers have now found stars in our home galaxy that formed outside our family of stars.

Nyx, a cluster of roughly 250 stars recently discovered within our galaxy, display velocities showing they originated outside our galaxy. This stellar stream likely arrived as part of a dwarf galaxy that merged with the Milky Way long ago. As the cluster approached the Milky Way, this family of stars was stretched out by gravity from our galaxy, pulling the cluster like taffy.

The world of GAIA

Using FIRE (Feedback In Realistic Environments) simulations, astronomers are able to model groups of stars, revealing the origin of these stellar furnaces. Starting models soon after the Big Bang, this simulation, one of the largest models of its type, shows how galaxies form into the formations we see today. Even using supercomputers, these nine simulations took months to complete.

The GAIA spacecraft, launched in 2013, is on a mission to create 3D maps of a billion stars in and beyond the Milky Way.

“It’s the largest kinematic study to date. The observatory provides the motions of one billion stars. A subset of it, seven million stars, have 3D velocities, which means that we can know exactly where a star is and its motion. We’ve gone from very small datasets to doing massive analyses that we couldn’t do before to understand the structure of the Milky Way,” Lina Necib, a postdoctoral scholar in theoretical physics at Caltech, explains.

Combining the findings of GAIA and FIRE, Necib and her team were able to model these stars using deep learning methods. They found that the Milky Way, once thought to have experienced few collisions, may have merged with a greater number of small galaxies than previously believed.

“Galaxies form by swallowing other galaxies. We’ve assumed that the Milky Way had a quiet merger history, and for a while it was concerning how quiet it was because our simulations show a lot of mergers. Now, with access to a lot of smaller structures, we understand it wasn’t as quiet as it seemed,” Necib describes.

Mock sausage without the tempeh

Data from a billion stars is impossible to study by humans without the assistance of dedicated computer systems.

“We can’t stare at seven million stars and figure out what they’re doing. What we did in this series of projects was use the Gaia mock catalogs,” Necib explains.

The Gaia mock catalogs, developed by Robyn Sanderson of the University of Pennsylvania, examines what astronomers would see if the FIRE simulations were correct, and seen by GAIA.

“We needed to make sure that we’re not learning artificial things about the simulation, but really what’s going on in the data. For that, we had to give it a little bit of help and tell it to reweigh certain known elements to give it a bit of an anchor,” Necib explains.

The team tested the simulation on known features of the Milky Way, including the Gaia Sausage, a distinct collection of stars once part of a dwarf galaxy, which merged with the Milky Way sometime between six and 10 billion years ago. These stars have a distinct orbital shape, which showed up in the simulations, along with halo stars which give our galaxy its shape, providing evidence the models were correct.

By studying baryons (a class of subatomic particle), the Ananke framework, developed at Northwestern University, models the behavior of stars.

The model also revealed a group of 250 stars traveling toward the center of the Milky Way, while also orbiting around the galaxy.

“The Nyx stars were found on two stages. First through a machine learning algorithm led by my collaborator Bryan Ostdiek, where we trained on the Ananke simulations to distinguish accreted stars (stars born in other galaxies and brought in through mergers) and disk stars, stars born in the Milky Way. After this first run, Bryan handed me a catalog of stars with an accretion score. I then used a clustering algorithm in kinematics to find these particular stars. Said another way, these stars have very specific motion, where they are corotating with the disk of the Milky Way, but they are also going to the center of the galaxy. This is interesting as it would be the first evidence of a merger that happened parallel to the disk,” Necib tells The Cosmic Companion.

Here’s a look at the GAIA mission, and how it is revolutionizing our understanding of the Universe.

When Dr. Necib first saw this data, she assumed the findings were in error, and did not inform her colleagues about the finding for three weeks. During that time, she realized that what she was seeing was real, and brought the data to her fellow researchers.

Necib searched previous findings to see if anyone else had previously discovered this group of stars, and found she was the first researcher to recognize the group. This gave the researcher the chance to name this unusual family of stars. She named the group Nyx, in honor of the Greek Goddess of the night.

FIRE on the mountain

The FIRE simulation provides realistic modeling of stars, but it is not specifically designed to model the Milky Way. The model was modified through experience learned from particle physics experiments conducted at the Large Hadron Collider (LHC) near Geneva.

“At the LHC, we have incredible simulations, but we worry that machines trained on them may learn the simulation and not real physics. In a similar way, the FIRE galaxies provide a wonderful environment to train our models, but they are not the Milky Way. We had to learn not only what could help us identify the interesting stars in simulation, but also how to get this to generalize to our real galaxy,” explained physicist Bryan Ostdiek of Harvard University.

The image originally appeared in this paper, here.

The team developed methods to track stars in the simulation, labeling each as being born in, or outside, the virtual galaxy being studied. This was then used to train the deep learning model, and applied to other FIRE galaxies.

“Accreted stars at the location of the sun are about 1–2% of the stars, making them very hard to find without dedicated techniques, which is why using machine learning was very helpful in this case,” Necib tells The Cosmic Companion.

Necib plans to continue her work on extragalactic stars using data currently collected by GAIA, as well as performing additional research, using some of the most powerful telescopes in the world.

“I am very excited about the third data release of Gaia, which should be next year. Other than that, with my collaborator Alexander Ji, I have two approved observing proposals at Keck in Hawaii, and Magellan in Chile to observe the chemical abundances of Nyx stars and therefore confirm their origin,” Necib explains.

This study was detailed in an article published in the journal Nature Astronomy. This finding, and other ones that further this research, help us learn more about the galaxy we all call home.