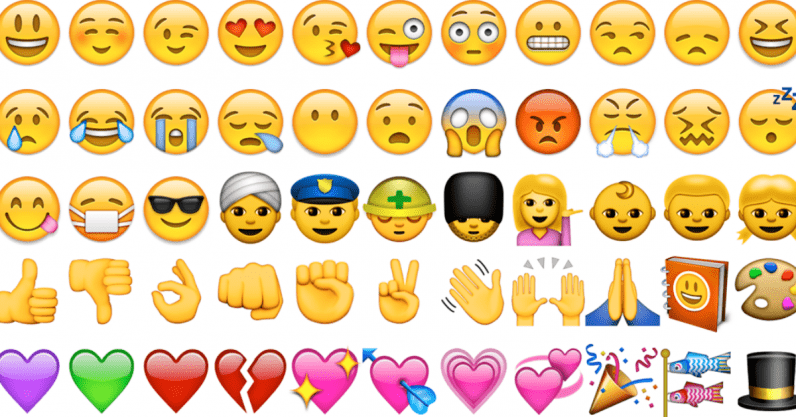 We use emoji everyday to say how we’re feeling, what we’re up to, and even as extensions of our personality. An emoji can be a convenient addition to a message, or even a primary method of communication. But do you know the complete history of how these lovable symbols have ingrained themselves into our culture? Well, let’s break it down:

Likely a misprint, The New York Times is responsible for the first use of an emoticon – :) – when they printed a transcribed copy of a speech given by President Abraham Lincoln in August 1862.

The first intentional use of emoticons happened soon after, when Puck, an American satirical magazine, included a small piece on ‘Typographical Art’ in the issue published on 30 March 1881. The art depicted Joy, Melancholy, Indifference, and Astonishment using only typography.

Jumping forward one hundred years: September 1982 saw Scott Fahlman, a computer scientist at Carnegie Mellon, sent out his suggestion for the use of “joke markers” to help reduce misunderstandings on the university’s online bulletin boards, and giving rise to modern emoticons.

Unicode 1.1.0, released June 1993, included characters reminiscent of emoji, but mainly sourced from the Zapf Dingbats font, and quite rudimentary by today’s standards.

One digital application that had a hand in spreading emoticons further than internal boards was AOL’s Instant Messenger. First released in May 1997, AIM introduced Buddy Icons: simple icons or images that could convey a feeling, imply an action, or communicate a status.

A Japanese artist, Shigetaka Kurita, wanted a simple way to convey information on the mobile platform he worked on in 1999, and ended up creating the first set of 176 emoji, with a preference for symbols, objects, and characters over faces.

Microsoft, obviously quite familiar with the popularity of emoticons in other digital platforms, introduces 30 new emoticons to MSN Messenger 6 in 2003.

In 2007, Google – looking to expand their presence in Japan and Asia – decided to incorporate emoji into Gmail. They partnered with KDDI AU on the project, and also introduced a unified set of code points for each emoji.

On 23 October 2008, Google’s set of 79 animated emoji debuted in Gmail, but with support limited to messages sent to mobile mail of Japan’s top three telecom carriers.

With the release of iOS 2.2 in November 2008, Apple introduced their own emoji, but by default only for SoftBank users in Japan. Users in other countries could access these emoji through apps in the App Store.

In March 2009, two Apple engineers – Yasuo Kida and Peter Edberg – submitted an official proposal to Unicode for the adoption of 625 emoji characters.

With the release of Unicode 6.0 in October 2010, emoji are officially accepted to the Unicode Standard, with most emoji characters assigned to a dedicated emoji block.

A year later, Apple finally gives iOS users easy access to emoji by adding an emoji keyboard to iOS 5, and doing away with the need for a separate app to use emoji.

In 2009, Fred Benenson enlisted Amazon Mechanical Turk workers to translate Moby Dick using emoji, and when the 735 page Emoji Dick was published in 2013, the US Library of Congress added a copy to its collection.

Later that year, Oxford Dictionaries controversially announced that the 2015 Word of the Year was in fact the “face with tears of joy” emoji. The decision, for some, was appropriate, since emoji are meant to represent words, phrases, and ideas.

In August 2016 Apple announced that with the release of iOS 10, the gun or pistol emoji would be replaced by a toy gun emoji. However, they were the first to change this, and most large vendors didn’t update the pistol to being more toy like until 2018.

Following an official submission by the then 15-year old Rayouf Alhumedhi, Unicode announced in November 2016 that Unicode 10 would include “Person With Headscarf,” or hijab, representing a move to make emoji more inclusive and representative of society.

The Emoji Movie was released in July 2017, and while global box office takings exceeded $200-million, you’ll struggle to find anyone willing to admit to watching it, or even enjoying it. It would go on to win five Razzies, including Worst Picture.

In March 2018, Dictionary.com becomes the first major reference resource to include descriptive explanations for emoji – not suggesting that emoji are words, but instead giving insight into how certain emoji are used.

Apple’s emoji collection continues to evolve since first debuting in iOS 2.2, with new emoji added to almost every major iOS update, and older emoji getting a makeover. The 10th anniversary of Apple emoji in 2018 saw 158 new emoji added to iOS12.1.

Unicode 12.0 is released in March 2019, adding 59 new emoji (230 if you include modifiers) to the ever growing emoji block, with this release emphasizing disabilities, gender neutral couples, and cultural symbols.

The Emoji Mashup Bot enters the twittersphere. It gives emoji the social media crowdsourcing treatment by allowing users to fuse together two or more emoji to create bizarre and sometimes useful new emoji designs. Standout examples include a crying face wearing sunglasses, an exploding clown, a sad cowboy, and a blushing cat.

Facebook announce they are selectively censoring “sexual emoji” or lude emoji strings. Examples include the eggplant (aubergine), sweat drip, and peach emoji, although we’re too innocent to imagine what those could possibly be used to symbolize 😇  .

The transgender pride flag emoji is finally released after years of rejected proposals. Trans people had previously made use of the lobster emoji to represent themselves. Emoji’s are now an essential way for diverse communities to have visibility online.

In response to the global Covid-19 pandemic Emojipedia suggest sequences of emoji that can be used when talking about correct hygiene and social distancing measures. Examples include the soap, hands and water drop emoji to illustrate washing hands; a train, mask and shopping trolley combo to remind people to wear protective gear when in public; and two people either side of a double arrow to illustrate social distancing.

Emoji will continue to evolve as new technologies allow for animated and higher resolution images for extra clarity.

This article was written by Izaak Crook, the Head of Marketing at AppInstitute, a SaaS App Builder platform that allows anyone to create their own iOS and Android app without writing a single line of code. You can read the original piece here.

Read next: The Neowise comet passes Earth on July 22 — and you can see it with your own naked eyes