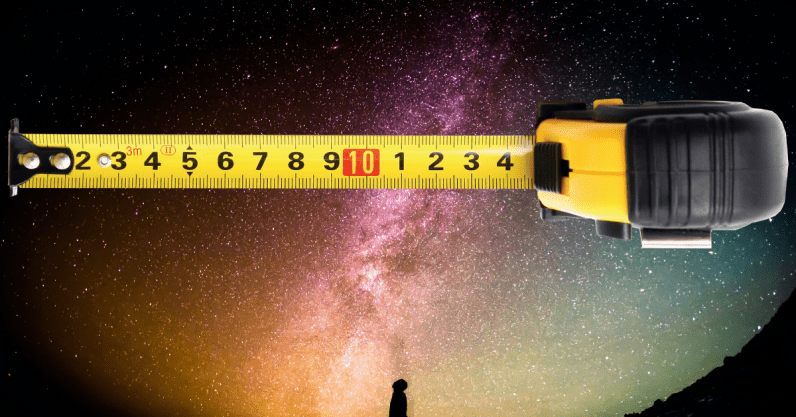 Understanding the Hubble constant, the rate at which the Universe expands, is one of the crucial figures astrophysics need to better understand the Cosmos. There are several ways to measure this rate, but each measurement produces significantly different results, forming one of the great mysteries of modern astronomy.

Data from a new study of the expansion of the Cosmos, conducted by astronomers utilizing an international collection of radio telescopes, further adds to the mystery. This study found expansion rate similar to those seen by other observatories, which (as a whole) differ significantly from predictions.

Galaxies in this study were seen huddling closer together than predicted in calculations based on either the “standard model” of the Universe, or the cosmic microwave background (CMB — roughly, the ‘echo’ of the Bag Bang). This could suggest one of the underlying theories of physics may be incorrect.

“Our measurement of the Hubble Constant is very close to other recent measurements, and statistically very different from the predictions based on the CMB and the standard cosmological model. All indications are that the standard model needs revision,” stated James Braatz, of the National Radio Astronomy Observatory (NRAO).

Earlier observations challenging theoretical values for the Hubble Constant relied on accurate measurements of the distance to far-flung galaxies. It is fairly straightforward to measure the rate at which objects — including galaxies — are receding away from us. What is more challenging is finding the distance to these bodies.

The Megamaser Cosmology Project utilizes an international network of radio telescopes to measure the Hubble Constant by discovering and studying galaxies to which astronomers can accurately measure distance. The detection method used in this study is independent of data used in earlier studies, providing additional support for experimental measurements of the Hubble constant.

The Hubble constant, first devised in 1929 by astronomer Edwin Hubble, is not a simple speed, like we might think of a car travelling 70 kilometers per hour. Because the entire Universe is expanding, more distant objects are seen moving away from us more quickly than nearby bodies. This rate is usually thought of using the bizarre-sounding units of kilometers per second per mega parsec (km/s/Mpc).

Theoretical calculations predict that galaxies should be moving at a rate of around 67 km/s/Mpc — for every megaparsec (3,260 light years) away from us they are, their speed increases by 67 kilometers per second.

However, observations suggest a significantly higher rate of expansion, closer to 74 km/sec/Mpc. Those findings, roughly 10 percent higher than predictions, pose a significant mystery in cosmology.

Astronomers are able to measure distances in space using one or more of several techniques.

The easiest of these, for objects close to us, is called the parallax method. Two images are taken of star or other object six months apart. If an object is near enough to our solar system, it will appear to have moved against the background stars, when the Earth was at opposite points in its orbit around the Sun, creating parallax. The first such measurement of the distance to a star was completed in 1838.

Beyond a certain distance, this effect grows too small to measure. Then, astronomers use standard candles — objects with a standard brightness. By measuring how bright such an object appears from Earth, and knowing its intrinsic brightness, it should — theoretically — be possible to determine its distance from Earth. Knowing this distance and how quickly it is seen expanding away from us allows astronomers to determine the all-elusive Hubble constant.

Two types of objects which astronomers use as standard candles are Cephid variable stars and a specific type of stellar eruption called type 1a supernovae.

Another means of measuring the expansion rate of the Universe involves looking at light coming from distant quasars, warped as it travels around the gravitational field of a massive galaxy. This arrangement can split the image of the distant quasar into several images, each arriving at Earth at slightly different times. By measuring these time differences, and comparing them to what we know of the physical geometry of the intermediate galaxy, it becomes possible to measure the expansion rate of the Universe.

If observations are correct, this higher-than-expected value for the Hubble constant would pose serious questions for large portions of the standard model of the Universe. Known as the Lambda Cold Dark Matter (Lambda CDM) model, this idea predicts the makeup of all of the matter and energy in the Universe — ordinary matter, dark matter, and dark energy. (Lambda refers to Einstein’s cosmological constant, representing dark energy.)

This framework also provides our basic understanding of the evolution of the Universe since the Big Bang. The video below shows Professor Wendy Freedman looks at the conundrum posed by differing values of the Hubble constant.

Examining galaxies with water-bearing molecular gas, astronomers focused their sights on supermassive black holes near the centers of these stars. Those galaxies which spin in such as fashion that they are seen nearly edge-on as seen from Earth produce emissions called masers, similar to large, naturally-produced lasers of radio waves. When these waves pass around a massive object, the light is effected in a way that can be analyzed to produce accurate measurements of the Hubble constant.

Astronomers set their sights on four galaxies, found between 168 and 431 million light years from Earth. They set some of the world’s most powerful radio telescopes in the search for maser radiation, including the Very Long Baseline Array (VLBA), Karl G. Jansky Very Large Array (VLA), and Robert C. Byrd Green Bank Telescope (GBT), along with the Effelsberg telescope in Germany.

When the study was complete, researchers reached roughly the same value as most experimental data — 73.9 km/sec/Mpc.

Science is, ideally, based on balancing the predictions of theory against the reality of experiment. This latest study could lend further evidence to the idea that the standard model of the Universe may need a significant new interpretation.

Read next: Understand how to move a system to the cloud and secure it with this CompTIA training